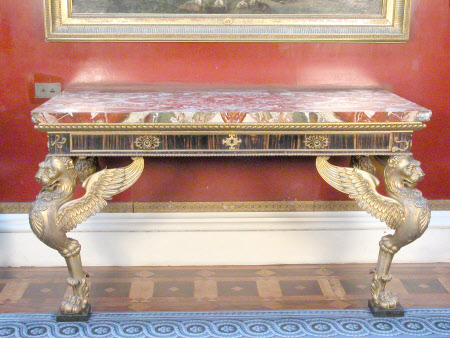 One of a pair of console tables, supplied in 1811 by Thomas Donaldson (d. 1857) carver and gilder of Shrewsbury for the Picture Gallery at Attingham Park. The stone tops veneered in red-veined Sicilian jasper, the bases of Coromandel, much of it carved in the solid, and the ornaments - apart from the handles which are of gilt bronze - all carved in gilt wood. The rear Chimera supports supplied later, in 1814.

Thomas Donaldson was a cabinet-maker, carver and gilder of Shrewsbury, and worked extensively at Attingham Park, supplying furniture, hanging pictures, and carving and gilding metres and metres of decorative woodwork, These tables were supplied by him for the Picture Gallery at Attingham, built to designs of John Nash between 1805 and 1808. The tables are very close to the designs of Thomas Hope and of Charles Percier and Pierre-Francois-Leonard-Fontaine, and are drawn in the popular 'Grecian' style. They are rare as console tables in that they are both fitted with a drawer in the frieze, presumably to hold unframed engravings and drawings. Delivered to Attingham in 1811, they cost £290. Donaldson's bill for them describes them as: ‘a Pair of Elegant Tables for Jasper tops of fine Coromandel wood. The Cornice} & Ornaments of the Frieze, and the winged Chimeare Legs Carved out of the Solid} and double gilded in Burnish’d Gold in the richest manner} £290. *Exclusive of Brackets since order’d} 4 Namur Plinths for feet to rest on. £1 10s 2 Patent Locks for D[itt]o £1 6s Paid Chairmen taking to Attingham £1 1s Self and Men fixing D[itt]o in Gallery £2 10s Both were originally supplied with green baize and leather covers, which are now lost. In 1814, they were modified by Donaldson, with the addition of ‘Chimera Back legs carv’d out of Solid wood and doubly gilt for Chimera Tables in gallery’ which suggests that plainer rear supports were replaced. When the 8th Lord Berwick went bankrupt in 1827, they were included in the dispersal sale of Attingham's contents. They were listed in the 1827 Attingham sale catalogue as: ‘Lot 125. A magnificent two-inch Sicilian Jasper Console Side Table, on an elegant coromandel-wood square panelled frame, and drawer in ditto, With rich carved and gilt knurled and twisted Mouldings, Supported by splendid massive Chimera figures, with extended Wings, Lion’s Heads, and Paw Feet, on square marble plinths, Exquisitely carved and gilt in burnish and mat Gold, Honeysuckle, Scroll-leaf, and other Ornaments, and massive Scroll Truss Lion’s Head Brackets at the Back, 5-Feet-10 by 2-Feet-11, and 3-Feet-4 High; Green Baize and Leather Covers. Lot 126. A magnificent Console Side Table, en Suite.’ The survival of the tables at Attingham suggests that they were bought in at the auction, at which they were noted as selling for £52 10s and £56 14s. Inexplicably, they were listed identically in the auction catalogue of 1829. It is possible that they were purchased in 1827 by the 2nd Lord Berwick’s younger brother, William Noel-Hill, 3rd Lord Berwick (1773 – 1842). (Megan Wheeler, January 2018, adapted from Rowell 2015).