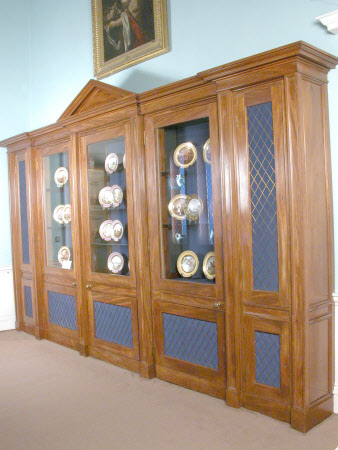 A mahogany triple-breakfront library bookcase, English, early 19th century. Topped by a moulded cornice centred by a moulded triangular pediment. The bookcase of five bays - the central three bays wider than the outer two. With a run of longer upper doors and shorter lower doors. All once fitted with brass lattice grilles lined with later pleated crepe. The upper doors to the central three bays now lined with glass. With paneled ends and on a plinth base. -- This bookcase is not mentioned in the Inventory taken at Attingham in 1913, so it is probable that it was introduced sometime in the 20th century. The South Ranges of Thomas Donaldson's bookcases in both the Inner Library and the West Ante Room were sold in the sale at Attingham in 1827.