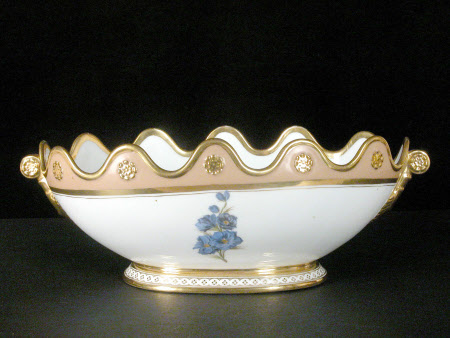 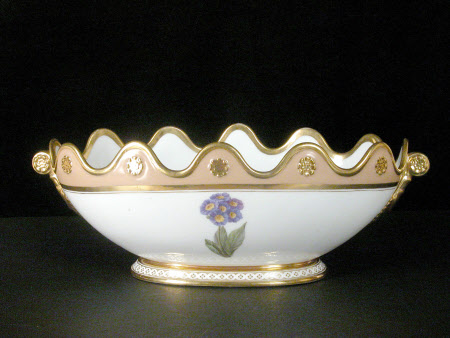 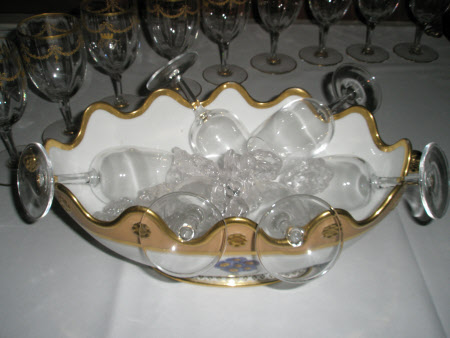 Attingham has over 200 pieces of Dagoty porcelain, all carefully brought back from Italy by 3rd Lord Berwick. This piece is used for washing and chilling wine glasses. The glass would have been brought to the guest at the dinner table by the footman every time a drink was required.

One of two deep oval monteiths with scalloped edge and gilt rosette handles, on low stand. Painted in enamels with blue auricular plant and spray of blue flowers. Buff coloured border, white and gilt guilloche pattern to base. Part of a Harlequin dinner service of hard paste porcelain made by Pierre-Louis Dagoty of Paris, circa 1815. Pierre-Louis Dagoty became the leading Paris factory by 1807, supplying the Empress Josephine and the Imperial Court at Versailles and Compiegne. The factory survived until 1867.

Believed to have been acquired by 3rd Lord Berwick: William Noel Hill, 3rd Baron Berwick (1773 -1842) who had been in Italy as British Envoy and Ambassador to the Kingdom of Naples and the Two Sicilies, from the collection of Caroline Murat, Queen of Naples. By descent bequeathed to the National Trust with the estate, house and contents of Attingham by Thomas Henry Noel-Hill, 8th Baron Berwick (1877-1947) on 15th May 1953.