The settle-cum-dresser, designed by Philip Webb 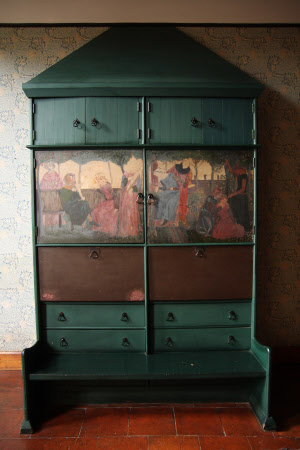 A settle-cum-cupboard, designed by Philip Webb. Wood. Large cupboard - door panels were painted by Morris and depict a scene from Malory entitled 'Sir Lancelot bringing Sir Tristram and the Belle Iseult to Joyous Gard'. The picture features Edward Burne-Jones offering cherries to his wife Georgie and Janey Morris seated on the left of the picture. Behind the fence stands Morris' servant, ‘Red Lion Mary’.

A green- and brown-painted oak settle-cum-cupboard, English, designed by Philip Webb, circa 1860-65, the sloped roof/cornice above two pairs of cupboard doors, of plank construction, above two larger mahogany cupboard doors with unfinished figural scenes painted by William Morris and Dante Gabriel Rossetti, the interior of the left hand cupboard painted gold to the interior left, the back and right with red wash, the back partially painted with gold with diapering in black (thought to be by Mr. Morris), below are two fall-front cupboards, painted brown, above four short drawers, the interiors of the drawers, cupboards, roof/cornice and underside of the seat painted red, the plain seat projecting forward, beneath the seat are two later fall-front cupboards (after circa 1994) with cut-out hand grips and modern brass slide bolts, the original cupboards and drawers with triangular pendant black-painted iron handles, the sides of the cupboard are painted brown. There have been numerous attributions for the figural scene painted on the cupboard doors but the latest studies would indicate that William Morris painted the figures and surroundings while Morris's friend Dante Gabriel Rossetti was in charge of the faces and hands. It is uncertain as to the subject of this figural scene, it has been claimed that the doors depict scenes from Niebelungenlied, alternatively that it could be scenes from Malory, representing Sir Lancelot bringing Sir Tristram and the Belle Iseult to Joyous Gard. However, it has been lately suggested that it is possible that the scene expresses a theme, that of Red House and its inhabitants, rather than being a specific depiction of a narrative. Several of the figures depicted (left to right) have been tentatively identified as Mary Nicholson, Morris and Burne-Jones's housekeeper (behind the fence), William Morris or Charley Faulkner (seated, cloaked in green), Jane Morris (seated, dressed in red), Edward Burne-Jones feeding a cherry to his wife Georgiana (seated on the ground), Rossetti's wife Elizabeth Siddal (leaning against a tree). During World War II the house was occupied by the National Assistance Board who partially painted the settle-cum-cupboard brown. Cleaning tests to the brown-painted doors have revealed a pink-purple background with a pattern of white circles on top, scored lines can be seen through the paint forming a grid around the circles. On the brown-painted sides incised squares can be seen in certain sections, cleaned patches show painted flowers are contained within the squares, the flowers arranged in six rows. Paint sample analysis has suggested the drawer fronts and the seat were originally painted red. It is thought that it was Pete Danson, the father-in-law of Jill Hollamby, daughter of the house's last owners, who painted the settle-cum-cupboard green and built the two cupboards beneath the seat for the Hollamby's, circa 1994.