Knight with the Arms of Jean de Daillon 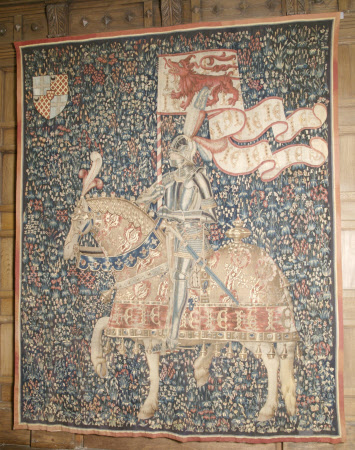 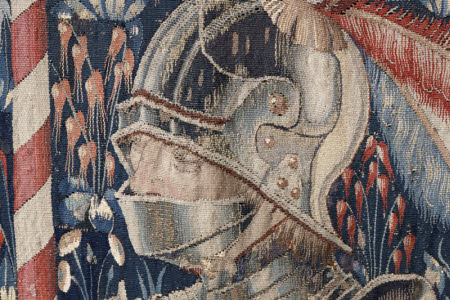 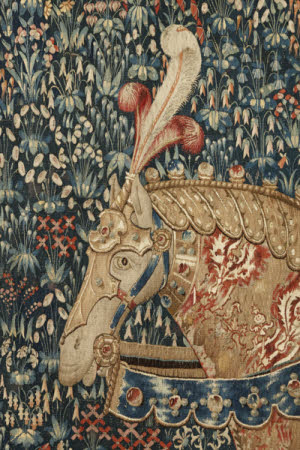 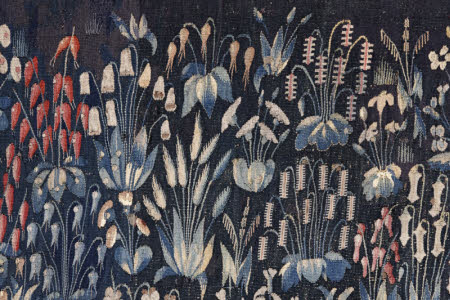 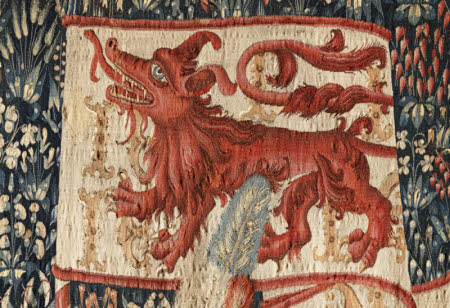 Tapestry of wool and silk, 5-6 warps per cm

An encounter with this warrior–knight takes us on a journey back to medieval France. The knight, with his gleaming armour and red wolf or tiger flag held aloft, parades his elegantly decorated horse through a dense meadow of flowers. The design of this type of tapestry is described as millefleurs (a thousand flowers). The knight appears fearless and triumphant, the epitome of bravery depicted in French tales that were sometimes known as chansons de geste (epic poems or songs of heroic deeds). The knight holds the coat of arms of Jean de Daillon, Seigneur de Laude or Lude (1413–81), who was governor of Dauphiné, a province in south-eastern France. Daillon commissioned the tapestry in 1477–9, but it was paid for by the town of Tournai as a gift. It was made in Tournai as part of a set by the master craftsman Guillaume Desremaulx (d.1482/3), but only this example survives. It is the earliest tapestry in the care of the National Trust.

Tapestry, wool and silk, 5-6 warps per cm, Knight with the Arms of Jean de Daillon, Guillaume Desremaulx, Tournai, c. 1477-81. A knight on horseback wearing armour and carrying a standard, on a dark blue ground covered with flowers. The horse wears a richly decorated caparison resembling red and gold brocade, with a wide red band around the bottom where the initials ‘IE’, tied together with a cord, are repeated. Bells hang from the bottom of the caparison and from a strap or cropper around the horse’s neck. The horse wears a gold plate to protect its forehead and this is decorated with red and white feathers, its bridle and wide reins are blue, and there is a gold cabochon on its back. The knight wears armour trimmed with gold, long spurs, a sword round his waist, and a helmet with red white and blue feathers, and carries a red and white striped pole supporting a fluttering standard. The standard is decorated with a red heraldic wolf or tiger and the initials ‘IE’ repeated, in the same form as they appear on the caparison. In the upper left hand corner there is a coat of arms. The dark blue ground of the tapestry is scattered with hundreds of tiny flowers, many of which are identifiable, including poppies, daffodils, scillas, wallflowers, thistles, honeysuckle and fritillaries. A narrow red galloon has been applied around the outer edge of the tapestry. The tapestry has seen extensive reweaving especially around the edges, including most of the horse’s legs.

Commissioned by Jean de Daillon, Seignure de Lude (1413-1480) from Guillaume Desremaulx of Tournai in c. 1477-79; delivered to the bishop of Sees, brother of Daillon’s widow, in 1483; on loan to the Metropolitan Museum of Art, 1916-1919; Collection of Sir Edward Speyer; bought by Sir Malcolm Stewart, 1935; bequeathed by Stewart to the National Trust for Montacute House, as part of a collection of six tapestries

Repeated on standard and on horse’s caparison: initials ‘I E’ tied together with a cord