An Exeter joined oak and painted Tester Bedstead, bearing the arms of James I. 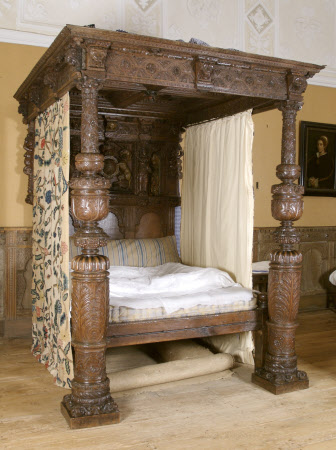 The coats of arms establishes the date of the bed as 1612, the year Prince Henry died and Princess Elizabeth was expected to marry Frederick V. Sir Edward Phelips was not only an officer of Prince Henrys household, but also organised the Masque of the Middle Temple, which formed part of Princess Elizabeth’s wedding celebrations.

A joined oak tester bedstead, English, probably Exeter, circa 1613. Bearing the arms of James I (1566-1625), Prince Charles (1600-1649), later Charles I (1625-1649) and Friedrich V, Prince Elector of the Palatinate (1596-1632). Partly painted and gilded, with some alterations and additions. The canopy with four deep panels carved with flowering plants, the cornice carved with shells and roses between lion's masks supported on massive turned cup and cover foot posts carved with lion's masks, rosettes and leaves, the back with caryatid figures framing carved panels with polychrome decoration, the centre panel carved in relief and painted with the Royal Arms.

Given to Montacute in 1946 by Mr. J. C. Blagdon-Gamlen. The headboard is deeply carved (in the centre) with figures of Peace and Plenty on either side of the royal arms and ‘IR’ for James I, flanked by (left) the three ostrich feathers of the Prince of Wales, either Prince Henry (1594-1612) or, more likely, his younger brother, the future Charles I (1600-1649) and (right) the arms of Friedrich von Wittelsbach Pfalz-Simmern, Friedrich V, Prince of the Upper Palatinate, Elector Palatine, the so-called ‘Winter King’ (1596-1632).The presence of the arms of Friedrich V suggests that the bed was made to mark his marriage in 1613 to Princess Elizabeth Stuart (1596-1662), daughter of James I. The marriage was postponed from 1612, due to the premature death of Prince Henry. It is likely that the bed was made in commemoration of the royal marriage alliance. The Montacute bed was almost certainly made in Devon, probably Exeter as suggested by the similarity of its carved decoration to the productions of Exeter makers such as the Garrett and Hermon families. Its early history is unclear, Mr. Blagdon-Gamlen thought that the bed had come from Mamhead Park, Devon. This could mean that it was made for, or acquired by, a family member connected with the court, such as Sir Peter Ball (d.1680) an English Lawyer and Politician who sat in the House of Commons between 1626 and 1640. He was also Recorder of Exeter and Attorney General to Queen Henrietta Maria, consort of Charles I. It is entirely appropriate that the bed has found a home at Montacute due to Sir Edward Phelips’s (c.1560-1614), the builder of the house, responsibility for Prince Henry’s household. Montacute, as an out-station of the National Portrait Gallery, also has many early-seventeenth-century portraits on show in the Long Gallery. The bed is an extremely rare, important and beautiful example of a carved Exeter bed. The only alterations relate to the probably nineteenth-century heightening by six inches, which can be seen in the back legs, and in concomitant additions to the front posts. The inspiration for much of the grotesque detail of the carving seems to have derived from engravings, such as the widely used publications of Jacques Androuet Du Cerceau (c.1515-85) and Hans Vredeman de Vries (1527-c.1606), whose influence can also be detected in contemporary Exeter carved woodwork. Historically it has been assumed that the Prince of Wales’s badge is that of Prince Henry, most accounts of the bed have taken this view. In fact there are no initials to confirm his identification, so the badge could equally well be that of his younger brother, the future Charles I, who succeeded him in 1612. Indeed, given that the marriage of the Winter King and Queen took place in 1613, it is more likely to be the badge of Prince Charles. (James Weedon, May 2019)

Believed to be from Mamhead Park, Devon, possibly commissioned by Sir Peter Ball (d.1680) in commemoration of the marriage between Friedrich V and Princess Elizabeth Stuart. Presented to Montacute by Mr. J.C. Blagdon-Gamlen through the Art Fund. 1946.