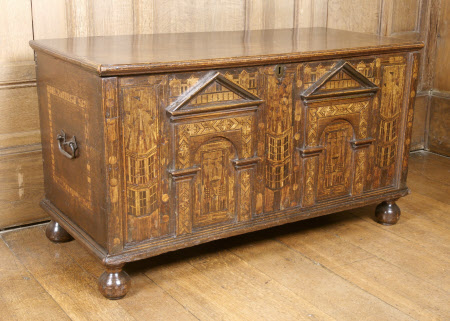 An inlaid oak chest, probably English, mid 16th century. The hinged plank top enclosing a fitted lidded box above a front with applied twin pedimented archways and inlaid with architectural and parquetry designs in holly, beech and sycamore. Raised on bun feet and with iron handles to the sides set in parquetry inlaid square panels. The feet replaced.

This type of chest is characterized by its construction using dovetailed boards and decoration of applied geometrical and architectural designs with marquetry and parquetry inlay. This form was historically attributed to Germany but are also thought to have been made in London, particularly Southwark or possibly Norwich, by immigrants from Germany and the Netherlands from about 1560. Their decoration of picturesque towered buildings probably derive from 16th-century printed designs, such as those published by Hans Vredeman de Vries (1527-1604). Often known as ’Nonsuch’ chests, after Henry VIII’s Palace of Nonsuch in Surrey, because their decoration of fanciful buildings was thought, wrongly, to represent that building. A comparable example in the National Trust collection is at Melford Hall, Suffolk (NT 926516) dated either 1562 or 1564. (James Weedon, March 2019)

Bequest to the National Trust of tapestries, pictures, furniture and objects d'art from Sir Malcolm Stewart in 1960.