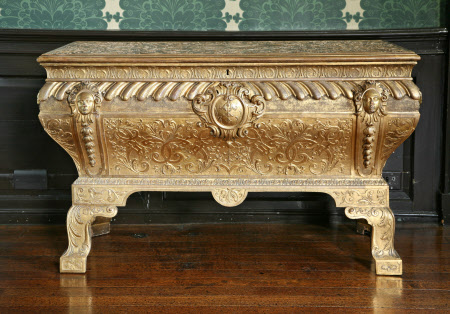 A carved and gilt gesso chest on stand, attributed to James Moore the elder (1670-1726), London circa 1720. Of sarcophagus form, with a hinged lid decorated with arabesque scroll work centred by an oval medallion, the interior entirely lined in red silk, the body of the chest with a gadrooned collar and tapered body decorated with further scroll work, centred with an applied cartouche and with flanking masks pilasters, repeated on each side. The stand with shaped pointed cabriole legs and square pad feet.

The inspiration for these chests is based around Italian Renaissance marriage cassone and sarcophagi from antiquity. André-Charles Boulle (1642-1732) and Jean Berrain (1640-1711) also incorporated these influences into their designs circa 1700 and the style was adopted by several London cabinet makers including the Rotyal cabinet maker James Moore. A comparable example, 'The Bateman Chest' circa 1720 is in the V&A collection (W.33-1948). Almost certainly made for William Bateman of Shobden Court, Herefordshire. Although a more sophisticated model, the design and detail is very similar to the Treasurer's House chest and can help form a solid attribution to the Moore workshop. Gilt gesso decoration was developed in England by the Huguenot refugee Jean Pelletier (fl.1681 – 1704) and his two sone Thomas & René who worked at Hampton Court Palace and Montafu House, Bloomsbury. (James Weedon, December 2019)