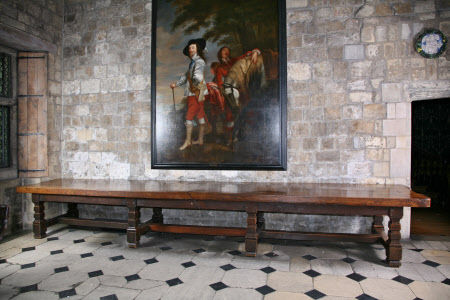 The central stretcher is a replacement, the original presumably lost when the table was halved. The top and base have been cut and adapted to be used as two separate tables. The sections removed from the middle and each end are thought to have been to fit the table around three pillars within a kitchen or food preparation area. A 1938 memo states, 'The long oak table in the Hall was bought by Mr Green through D.L. Isaacs from Bradfield Hall in Wiltshire.' This is now thought to be a confusion with Bradfield Hall, nr Reading from where the table was sold as 'elm' in July 1898. The table may have originated at Barrington Hall, Essex; perhaps made 1730-40 in an antiquarian manner and possiby using older timber. See: Lucy Wood 'The Upholstered Furniture in the Lady Lever Art Gallery' 2008 (p.1074). (James Weedon, January 2020)

Given by Frank Green (1861-1954) along with house, garden and contents to the National Trust in 1930. Probably purchased by him through D.L. Isaacs from Bradfield Hall , nr Reading, Berkshire circa 1898.