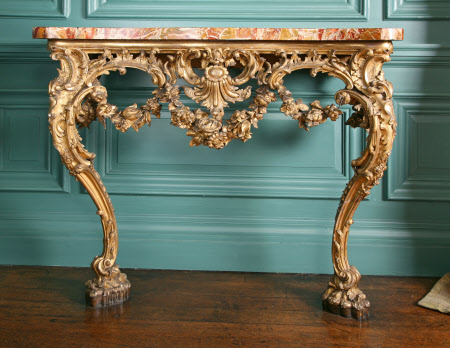 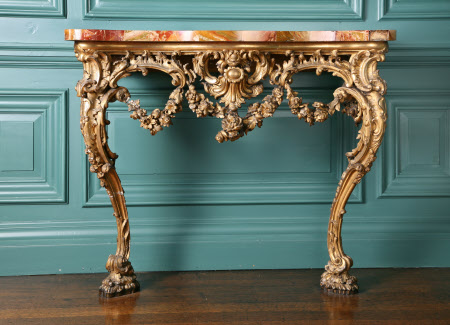 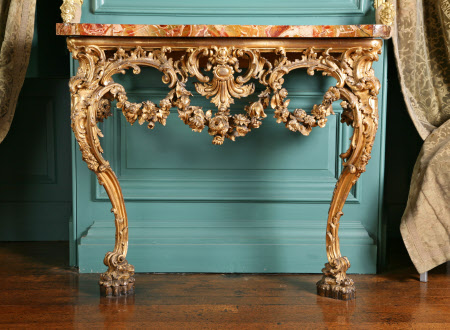 A set of three gilt deal, gesso and jasper serpentine console tables or 'slab frames', in the manner of William Ince (1758/59-1804) & John Mayhew (1736-1811) London, circa 1760. Each with a veneered Sicillian jasper top raised on a highly carved frameswith floral scrollwork and garlands of flowers, the cabriole legs with conforming carving and scroll feet.

The partnership of Mayhew & Ince was one of the most significant, probably the longest lived but, as far as identified furniture is concerned, the least well-documented of any of the major London cabinet makers of the 18th century. The firm's chief claim to attention has been the ambitious publication in 1762 of 'The Universal System of Household Furniture', a volume of eighty-nine numbered folio plates and six leaves with pairs of smaller plates, dedicated to the 4th Duke of Marlborough. Originally issued in serial form between July 1759 and August 1760, it was intended to run to 160 plates, modelled very closely (as the pre-publication advertisement makes clear) on the example of ‘the very ingenious artificer’ Thomas Chippendale whose Director had first appeared in 1754. Plates LXXIII & LXXIV illustrate 'Slab frames' with marble tops whose design characteristics can be compared to the three tables at the Green collection. It is unfortunately unclear where the tables were before they came into the collection but they are of excellent quality and proportion and would almost certainly been made in a London workshop of some standing. (James Weedon, November 2019)