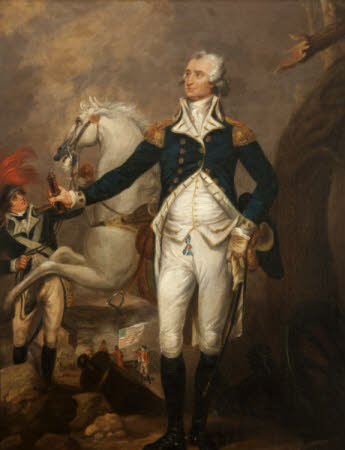 Oil painting on canvas, General George Washington (1732-1799) after John Trumbull, RA (Lebanon, Connecticut 1756 – 1843 New York). General George Washington in a blue military uniform with white facings. He stands before his white charger, which is held by the reins by a trooper in similar blue uniform with white facings and breeches. His right are is slightly raised and in his hand he holds what appears to be a scroll. His left hand rests upon his sword handle, he faces to the left and is pictured full length. In the background are redcoated soldiers, a field gun and the American Stars and Stripes flag. On the back of the canvas is a contemporary label, so far only partly deciphered, and two dates in the 1770s. Canvas signed (?). This is a copy of a picture painted in 1792 at Yale University Art Gallery (1806.1).

Presented by Mrs P. Fellowes of Rotherham in 1977, following a visit of President Carter