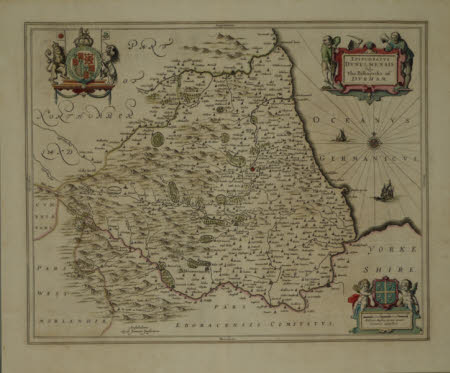 Map of Durham, circa 1648, by Janssen. In Amsterdam in the middle of the seventeenth century, there were two rival firms- Blaen and Jansson - producing atlases of incomparable beauty and elegance. Two competed to produce an atlas containing county maps of the British isles, each basing his map on the earlier maps of speed. The first atlas issued by either of the two firms was that of Blaen, but in 1646 Jansson a very similar atlas. Some of the maps were in fact copied from Blaen and it is often difficult to distinguish between the two. During the late 16th and early 17th century it was common practice to fill the seas with monsters or beautifully engraved sailing vessels, but Blaen and Jansson often left seas blank for the occasional ship and horizontal lining round the coasts. Jansson produced fine quality engravings but the maps were somewhat lacking in originality. The maps were issued in numerous editions and in several languages, the text sometimes being printed on the reverse of the map