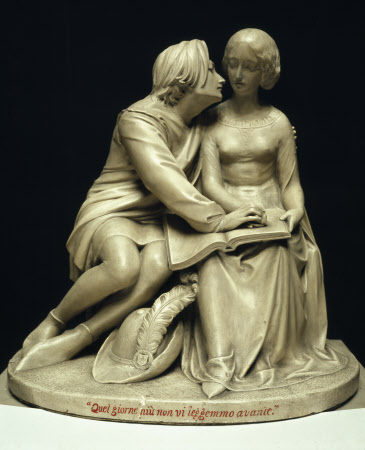 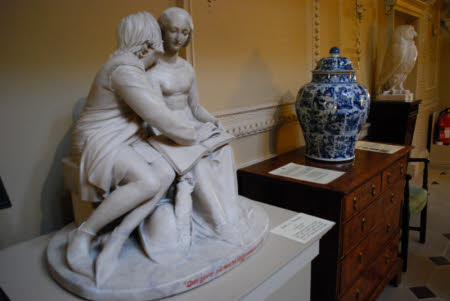 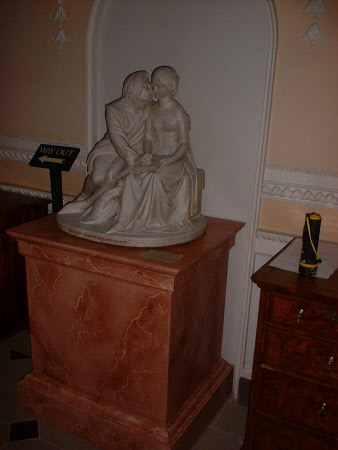 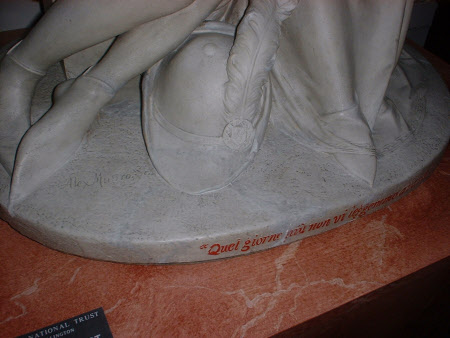 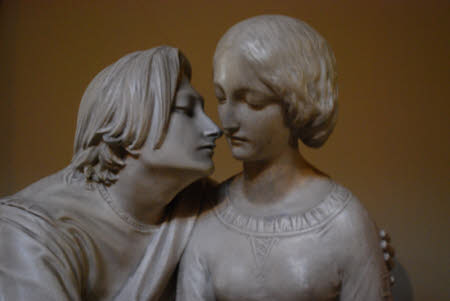 Plaster on plaster base, Paolo and Francesca, Alexander Munro (Inverness 1825–Cannes 1871), 1851, signed 'Alex Munro Sc' on base. Inscribed at front of base in red lettering: 'Quel giorno più non vi leggemmo avante'. Depicting a scene from Dante's Inferno where the lovers Francesca da Rimini and Paolo Malatesta read about the affair between Guinevere, the wife of King Arthur, and his chief knight Lancelot. The couple are shown moments before their first adulterous kiss.

The scene is from Canto V of Dante's Inferno, in which Francesca da Rimini describes to Dante and Virgil the moment she and her lover Paolo Malatesta read about the passionate affair between Guinevere and Lancelot and are moved to have their first kiss. She recounts: 'As we read on, our eyes met now and then, And to our cheeks the changing colour started, But just one moment overcame us - when We read of the smile, desired of lips long-thwarted, Such smile, by such a lover kissed away, He that may never more from me be parted Trembling all over, kissed my mouth. Her final words are inscribed in Italian on the base of the cast: 'Quel giorno più non vi leggemmo avante', 'We read no more that day'. Francesca da Rimini (1255-c.1285) was married to Giovanni Malatesta (d.1304) as a political arrangement between their warring families. The affair between Francesca and Paolo (1246-c.1285), Giovanni's brother who was also married, lasted some ten years before Giovanni discovered them together and they were murdered. Dante and Virgil meet Francesca and Paolo in the second circle of hell, reserved for the lustful, where they have been condemned to exist in an eternal whirlwind, swirling perpetually in a vortex which symbolizes their whirlwind affair. Munro first exhibited the plaster maquette in the Sculpture Court of the 1851 Great Exhibition. It was later bought by Dr Henry Acland, the moving force behind the Oxford University Museum (for which Munro produced six sculptures of scientists) and an old friend of the Trevelyans of Wallington. A marble version was commissioned by William Gladstone (1809-98), later Prime Minster, which is now in the collection of the Birmingham Museums and Art Gallery (accession number 1960P29). Munro gave a plaster cast to his friend and fellow artist Dante Gabriel Rossetti who had depicted the doomed lovers in a watercolour of 1855 (Tate, N03056). Alice Rylance-Watson January 2019