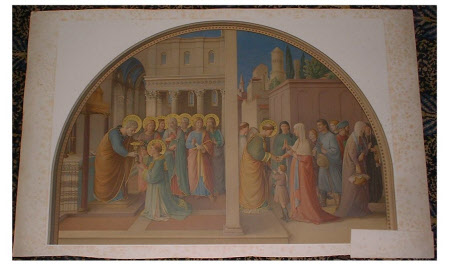 Print, coloured, The Ordination of Saint Stephen by Saint Peter and his Distributing of Alms after Fra Angelico (Vicchio c.1400 - Rome 1455). A print showing the Ordination of St. Stephen and his distribution of alms. To the left is seen a figure kneeling before another holding a chalice. They are surrounded by other figures all are dressed in monk's garb. To the right a figure is seen giving alms to a women, with other people looking on. An Arundel Print. The original is in the Capella Niccolina, Vatican, Rome