Idleness and the Pilgrim of Love 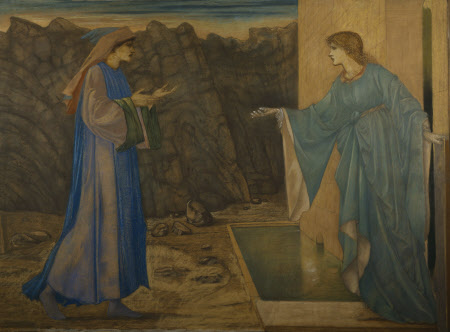 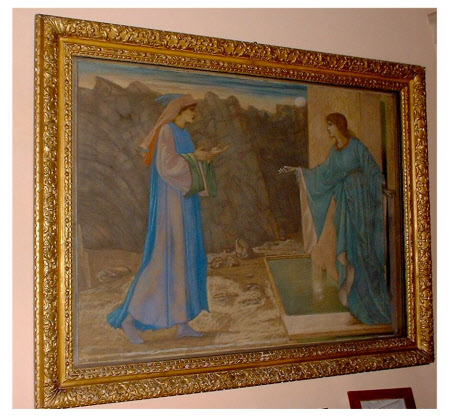 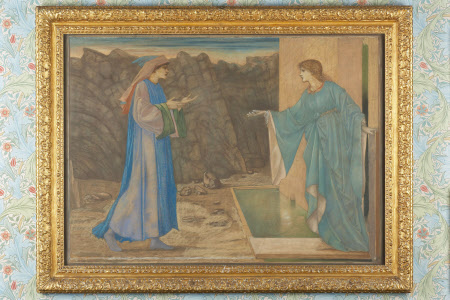 Pastel, black chalk and watercolour, over an earlier cartoon in pencil, on paper

The artist has used a mixture of materials but essentially this picture is a pastel. It was originally a cartoon for an embroidered frieze but Burne-Jones coloured it to sell as an artwork in its own right. It was first owned by his assistant Charles Fairfax-Murray. It illustrates an episode in the Romance of the Rose, translated by the mediaeval English poet, Geoffrey Chaucer, from the French poem by Guillaume de Lorris and Jean de Meun.

Pastel, black chalk and watercolour, over an earlier cartoon in pencil, on paper, Idleness and the Pilgrim of Love by Sir Edward Coley Burne-Jones (Birmingham 1833 - London 1898), 1876. There is a frame or border drawn to enclose the composition. The male figure of the Pilgrim, dressed in blue, approaches a doorway from the left, against a landscape of boulders, in which stands the female figure of Idleness, holding her hand out, ready to receive him. In front of the building, the gate to the walled garden, below to her right, is a rectangular pool of water. This is an illustration from the story, translated from the french poem by Guillaume de Lorris (d. 1230) and completed by Jean de Meun, by Chaucer of The Garden of Idleness in The Romaunt of the Rose (Romance of the Rose).

According to the story, in the form of a dream, a poet is invited by Idleness to enter the Garden of Mirth. There, in the water of the fountain of Narcissus he sees a reflection of a rose bush and falls in love with a bud. Burne-Jones worked on the illustration for the story for several years. According to Malcolm Bell (1901), his first design appeared in 1875. This picture is dated 1876 and the large oil painting in Tate, Love and the Pilgrim, dedicated to Swinburne, was begun in 1877, but only finished in 1896-97. Burne-Jones never completed the series, but in 1889, he was engaged on painting 'L'Amant' as a companion to the present work. A curious feature in the drawing is the hands of Idleness, which are spotted as if they were leprous. This is due to wear and is not intentional is confirmed by the poet's explicit reference to the character's hands 'And for to kepe hir hondis faire/ Of gloves white she had a paire' (lines 518-9). So worn is the picture, that when restored in 1986, the restorer had to resort to another oil painting, on the art market at the time, for guidance. There are embroidered versions done by Margaret, Lady Bell (mother of Mary Bell, Lady Trevelyan), and one of her daughters (possibly Florence) for the dining room of Rounton Grange, Yorkshire, the house of her husband, Sir Lowthian Bell,1st Bt (1816 - 1904) as part of a needlework frieze of the 'Romaunt of the Rose', conceived around 1872, completed in 1880, and now in the William Morris Gallery, Walthamstow. (Tania Adams)

Charles Fairfax Murray (1849 - 1919); sold by Agnews on his behalf to Sir George Trevelyan, 1904, as ‘Chaucer's Dream of Fair Women’; mentioned in Sir George Trevelyan's Manuscript journal for that year and thence by descent until given with the property to the National Trust in 1941 by Sir Charles Philips Trevelyan, 3rd Bt (1870 - 1958)

Verso: Printed label on the back of the frame, with additions in pen and ink (distinguished by parentheses): ‘This picture being painted in Water Colours (and pastel) would be injured by the slightest moisture. Great [underlined three times] care must be used whenever it is removed from the frame. (The Garden of Idleness Romance of the Rose 1876).’