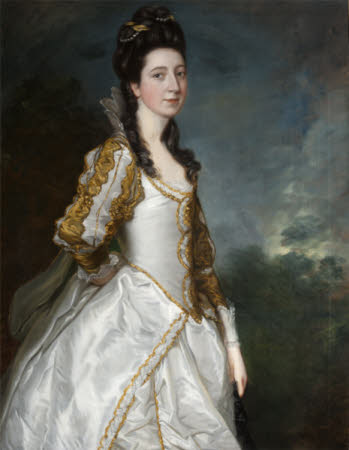 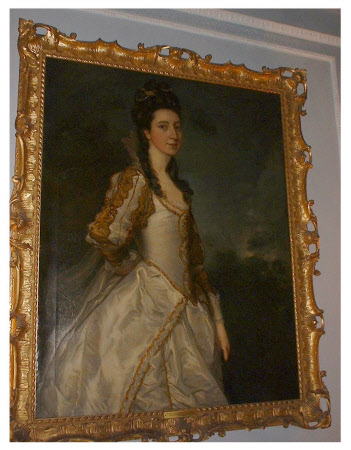 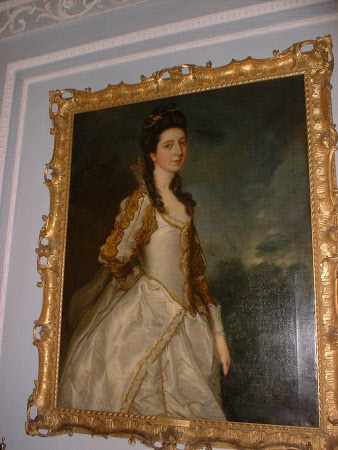 According to a long-held family tradition this portrait by Thomas Gainsorough was altered by Sir Joshua Reynolds on a visit to Wallington. Technical analysis confirmed that the picture was indeed substantially repainted so as to transform the pose, dress and hair of the sitter, and to obscure a lap dog and large hat. While there is no evidence that Reynolds worked at Wallington, his account books reveal that his London studio was responsible for the extensive alterations, sometime between 1771 and 1776 (Grimaldi and Capadose 2011).

Oil painting on canvas, Susanna Trevelyan, Mrs John Hudson (1736-1779) by Thomas Thomas Gainsborough (Sudbury 1727 - London 1788) and studio of Joshua Reynolds (Plympton 1723 - 1792), label on back of lining canvas reads: Miss Suky T- 1761. A three-quarter-length portrait, turned to the right, gazing at the spectator, with long ringlets and wearing a white satin dress embroidered with gold; her right hand on her hip, her left at her side. The portrait was originally painted by Thomas Gainsborough in about 1761. It was substantially repainted in the studio of Joshua Reynolds between about 1771 and 1776 when a lapdog and large hat was painted out, and the pose, costume and hair comprehensively reworked.

Grimaldi and Capadose 2011 Nicola Grimaldi and Jeremy Capadose, '"Disrobing Suky": one mistress, but two masters? The examination of a portrait of Susanna Trevelyan', The British Art Journal, vol.12, no.3, Winter 2011-12, pp.9-19