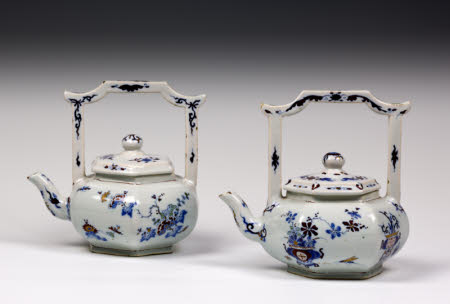 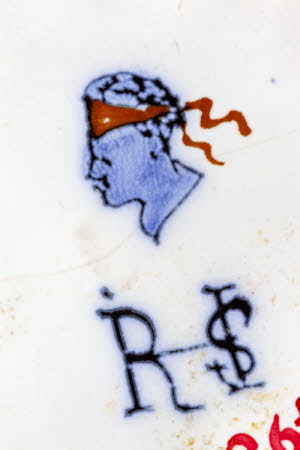 Two Het Moriaenshooft (Moor's Head) factory faience teapots, after a Yixing original, polychrome painted and enamelled in iron-red and gold, made at the workshop of Rochus Jacobz. Hoppesteyn, Delft, the Netherlands, c.1686–8.

In 1688, the wealthy merchant Sir William Blackett (1657–1705), who had been made a baronet in 1685, purchased the estate at Wallington, Northumberland, to create a private retreat away from his palatial town house in Newcastle, Anderson Place. Blackett was co-heir to one of the largest fortunes in the North-East, derived from shipping, coal and lead mines, and trade between Newcastle, Stockhold and Amsterdam. In 1703, his good were seized in Copenhagen and released only through diplomatic intervention, evidence of his powerful international connections. This rare pair of polychrome teapots, made at Het Moriaenshooft (The Moor’s Head) factory in Delft, then owned by the founder’s son, Rochus Jacobz. Hoppesteyn (1661–92), may have been an imported luxury acquired through Blackett’s agents in Amsterdam. Their hexagonal form, with an upright, yoke-shaped handle, copies directly a specific teapot shape made in red stoneware, near Yixing, in Jiangsu province, China. The Dutch Eat India Company had been importing Yixing teapots in a variety of shapes since the 1670s. the Yixing prototype for the Wallington teapots is uncommon, but variants are illustrated in an engraving od a Dutch interior by Pieter van den Berge (1702–26), ‘Namiddag / L’Après Dinée’, and a printed London broadside advertising the ‘sale of several rich Indian goods’ by lottery, dated 1694. The Het Moriaenshooft factory also produced a more common hexagonal teapot with the standard low side handle, after another Yixing model. In competition with these Asian imports, which included colourful Japanese Kakiemon-style teapots, the Moor’s Head factor’s proprietors invented a new type of polychrome faience, combining enamels with inglaze pigments. Around 1680, they developed a low-fired, garnet-coloured red enamel extracted from ferruginous clay. This was combined with the usual high-fired pigments: cobalt blue, manganese purple, copper green and iron yellow. This was followed by a second, low-temperature decoration - an expensive process that limited the market for such wares to wealthy merchants, gentry and aristocrats. An early example of the firm’s new palette is an armorial table services that commemorates the marriage in 1682 of Sophia Dorothea of Brunswick-Lüneburg and George Louis, Elector of Hanover, later George I of Great Britain. One of the Wallington teapots is decorated with flower-filled archaistic vases inspired by Chinese porcelain of the 1640s and the other has branches of flowering paulownia and chrysanthemums. Both were possible painted by Jeremias Godtling (c.1642–1704). The factory closed in 1692, on Hoppesteyn’s death, and their exquisite standard of workmanship was rarely repeated thereafter.