Jephthah greeted by his Daughter 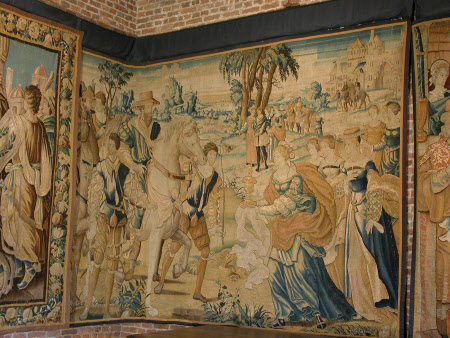 Tapestry, wool and silk, 5 warps per cm, Jephthah greeted by his Daughter, Oudenaarde, c. 1550-1575. In the centre there is a man on a white horse, accompanied by an attendant carrying a cane and, to the left, a large group of man, some also on horseback. He is met by a young woman who approaches on foot from the right carrying a golden vessel and followed by female attendants. More figures approach in the distance, and in the upper right hand corner there is the gate of a city. The tapestry has lost its borders which have been replaced with narrow wool rep galloons. The scene has traditionally been described as ‘Jephthah greeted by his Daughter after his Victory of the Amorites’. Before going into battle against the Amorites, enemies of the people of Israel, Jephthah vowed that whoever came to meet him on his return, he would sacrifice. When his daughter came to meet him, this was her unlucky fate (Judges, 11).