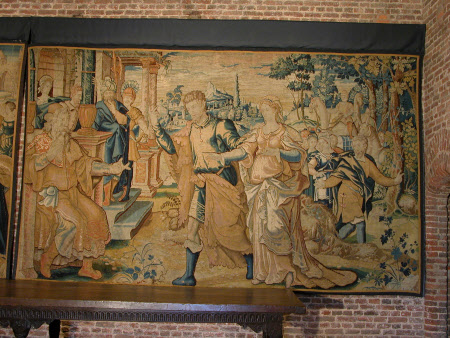 Tapestry, wool and silk, 5 warps per cm, Eliezer presenting Rebecca to Abraham, Oudenaarde, c. 1550-1575. To the left an old bearded man sits, opening his arms to welcome a young woman who is presented to him by a man in the centre of the scene. In the left background there is a palace with attendants, and in the right background figures and camels carrying baggage. The tapestry has lost its borders which have been replaced with narrow wool rep galloons. The scene has traditionally been described as ‘Eliezer presenting Rebecca to Abraham’. Abraham sent his servant Eliezer to the land of Canaan where he was born, to find a bride for his son Isaac. Eliezer returned with Rebecca, the granddaughter of Abraham’s brother (Genesis 24).