Ceyx and Alcyone (after Richard Wilson) 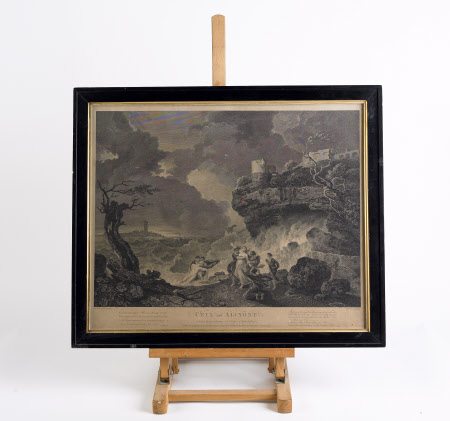 Engraving with etching on paper

Engraving with etching on paper, Ceyx and Alcyone (after Richard Wilson) by William Woollett (Maidstone 1735 - London 1785), published 1769. Wilson painted Ceyx and Alcyone (exhibited at Society of Artists in 1768 and now in National Museum Wales, Cardiff) with an engraving in mind, commissioned by the print-publishing partnership of William Wynne Ryland and Henry Bryer. The scene depicted is from the Roman poet Ovid's Metamophoses XI that relates the shipwreck of Ceyx on his way to consult the oracle Claros. His wife Alcyone dreamed of the tragedy and was so distraught when she found out it was true, as his corpse is dragged ashore, that the pitying gods transformed the couple into birds. It has been suggested, anecdotally, that Wilson composed the rocky cliff and tower above by studying a pot of beer on a Stilton cheese.