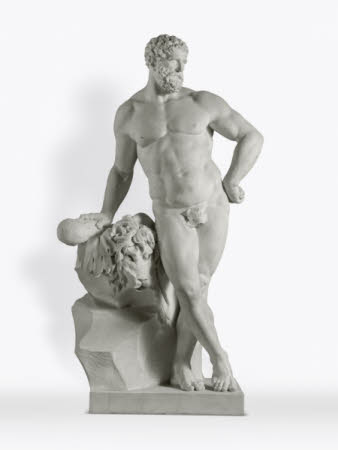 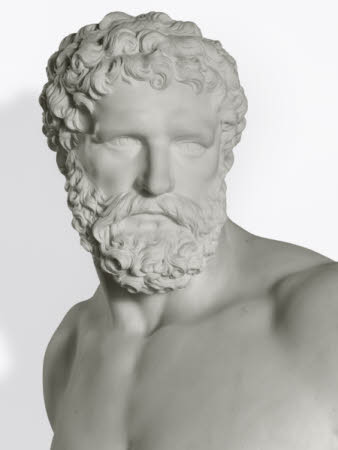 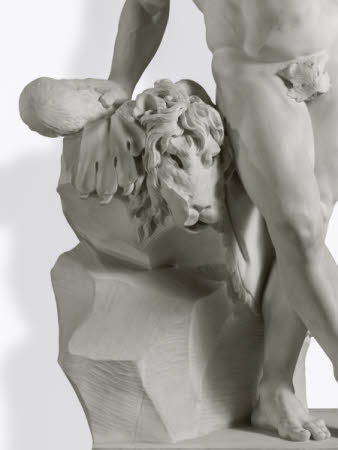 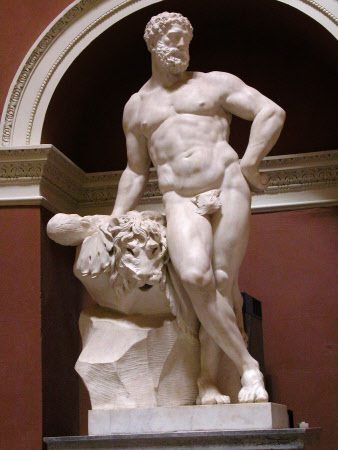 Marble, Hercules, John Michael Rysbrack (1694-1770), 1756, signed and dated ‘Mich. Rysbrack 1756’. A colossal marble statue of Hercules, nude with the exception of a fig leaf, standing in contrapposto looking out to proper left. The figure is shown leaning against a boulder, holding his club in the proper right hand and resting it on the pelt of the Nemean lion which is draped over the boulder. The top of his proper left hand rests on the left hip; Mounted on a marble base and grey marble pedestal supplied by Rysbrack (NT 562911.2).

Described by Horace Walpole as Rysbrack’s ‘chef d’oeuvre’, this colossal statue of Hercules was commissioned by Henry Hoare II (1705-85) in 1747 and later mounted as ‘the principal ornament’ in the Pantheon at Stourhead (Walpole quoted in Webb 1950, p.311). The statue originates from a terracotta model of 1744 (NT 732894) which was bequeathed to Hoare in the sculptor’s will and which is featured in the famous portrait of Rysbrack by Andrea Soldi, painted in 1753 (Yale Center for British Art, Paul Mellon Collection, B1976.7.75). A paper agreement of July 1747 records the details of the commission: Rysbrack and Hoare, a life-long patron of the sculptor, settled on ‘the sum of three hundred pounds’ for a ‘Hercules in statuary marble six feet three inches high’, with plinth, ‘finish’d according to the model [i.e. the terracotta] agreed on’. A deposit of ‘one Hundred and fifty pounds’ was paid at the start, with ‘seventy five pounds’ promised half-way through, and the ‘remaining seventy five pounds’ payable upon completion. A note inscribed on the same piece of paper, but dated July 1752, shows that work had only then just begun, five years after the agreement was drawn up. Despite waiting nine years for his Hercules, Hoare was delighted with the final result, paying the sculptor a further £50 ‘beyond ye Contract’ in July 1757. In 1760 Rysbrack completed a companion statue of the Farnese Flora at the cost of £200 (NT 562912.1, the terracotta model is in the Victoria and Albert Museum, London, inv.no. A.9-1961). The sculpture is an intriguing composite, incorporating the head of the prototype Farnese Hercules (Museo Archeologico Nazionale, Naples), and, according to Horace Walpole, various bodily 'parts and limbs of seven or eight of the strongest and best made men in London’, chiefly ‘bruisers and boxers’ (Walpole quoted in Webb 1950, p.311). ‘The arms were Broughton’s [i.e. Jack Broughton (1703/4-89), an English bare-knuckle boxer], the breast a celebrated coachman’s, a bruiser, and the legs were those of Ellis the painter’, a ‘great frequenter’ of a London ‘gymnasium’ (ibid). The figure's overall stance originated from an engraving after Pietro da Cortona (1596-1669) published as the frontispiece to Ferrari’s Hesperides (1646), a folio Rysbrack himself owned (Kenworthy-Brown 1983, pp.216-9; for an impression see British Museum, London, 1872,0511.1154). See also the associated terracotta bust of Hercules by Rysbrack in the collection of the Yale Center for British Art (B1977.14.28). Alice Rylance-Watson 2019