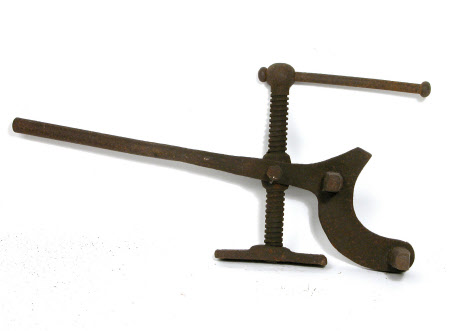 Flooring dog. The pins were placed either side of the floor joist, the handle was then rotated and held to lock the tool against the joist. The screw was then used to force the floor board into position prior to nailing down. For a long time these were mystery objects, only recently being identified by an elderly visitor who remembered using such a tool in his youth. In the Finch archive is an invoice relating to work in laying a skittle alley for Sir Henry Hoare of Stourhead, who owned land nearby. Could these be the tools used by the Finch carpenters for this job?