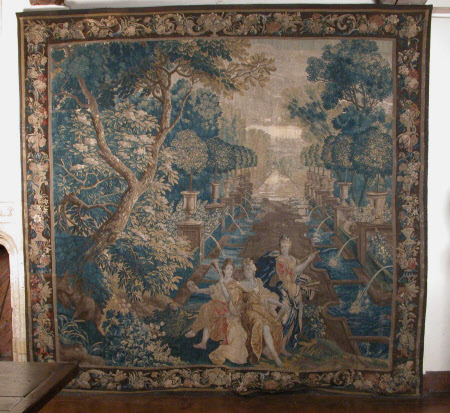 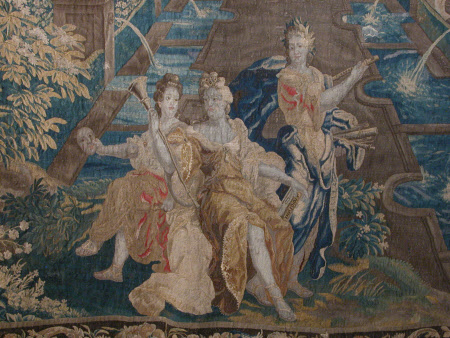 This tapestry is originally from the Baqueting Room in Baddesley Clinton and was bought by Baron Ash in the 1930s when money was tight there. There is a photograph in the collection showing Baron Ash in front of this tapestry.

Tapestry, wool and silk, 6-6½ warps per cm, Three Muses, probably Oudenaarde, c.1690-1710. A large square tapestry showing a group of allegorical female figures representing three of the Muses in a formal garden setting. In the centre is Clio, muse of history, seated and wearing a pale yellow cloak over a yellow dress, holding a volume entitled ‘THVCYDIDES’ and a long trumpet. To the left, also seated, is Melpomene, muse of tragedy, wearing a yellow and red cloak over a pale yellow dress and holding a theatrical mask of tragedy. Behind and to the right stands Euterpe, muse of music and lyric poetry, wearing a blue cloak over a yellow dress and a laurel wreath in her hair and holding a bundle of flutes. To the left of the women is a large tree and behind them is an avenue of fountains and clipped trees in urns extending to a single vanishing point. A small winged boy sits by one of the fountains holding a pair of dividers over a globe. The border consists of a flowing design of scrolls, flowers and fruit with a small vase at the centre of each of the four sides, on a dark brown ground.

In classical mythology the Muses were the goddesses of creative inspiration in poetry, music and the other arts. They were the daughters of Jupiter and Mnemosyne, who lay together for nine nights and had nine daughters. The Muses were characterised as nymphs who presided over springs capable of giving inspiration and this explains the frequent appearance of fountains and water in artistic representations of them, including the tapestry at Packwood. Originally the Muses were collective patronesses of the arts, but later on each one was assigned an individual area to preside over and their attributes began to be codified. After the publication of Cesare Ripa’s ‘Iconologia’ in 1592, these attributes become increasingly standardised. The tapestry at Packwood follow the attributes set out by Ripa for Euterpe, Melpomene and Clio, whilst the small boy on the right holds the attributes of Urania, muse of Astronomy. An identical tapestry with a more elaborate border is in the Kunsthistorisches Museum in Vienna, and forms part of a set of eight representing ‘Apollo, Minerva and the Muses’ (Birk 1889, no. LXV, p. 179). Each panel in the set contains a group of between two and four figures, sometimes Muses alone and sometimes accompanied by either Apollo or Minerva. Three of the tapestries in Vienna bear the mark of the tapestry producer Gerard Peemans (c. 1645-1725), and one of them has the mark of the city of Brussels where his workshop was situated. A single panel from another weaving of the set with the same narrow border as the example at Packwood is in a private collection in Belgium (de Meûter 2001, p. 143). The tapestry set was designed by Lodewijk van Schoor (c. 1650-1702) and Pieter Spierinckx (1635-1711), whose names appear on one of the tapestries in the set in Vienna. Both artists supplied designs to a number of weavers in Brussels, Antwerp, Oudenaarde and elsewhere, and both are known to have travelled to France. It is possible that the tapestry at Packwood was woven in the workshop of Gerard Peemans, like the related set at Vienna. However the same border is also found on a set of six tapestries with scenes from the Metamorphoses of Ovid, in the Musées Royaux d’Art et d’Histoire, Brussels, which have been attributed by Ingrid de Meûter to the Oudenaarde workshop of Pieter van Verren. This attribution is based on the existence of documents which show that van Schoor supplied cartoons for a set of ‘Metamorphoses’ to van Verren in 1694 and earlier (de Meûter 2003, p. 143). No such documentation exists for the set ‘Apollo, Minerva and the Muses’, but de Meûter also attributes the tapestry at Packwood, and the related piece in a private collection in Belgium, to van Verren in Oudenaarde rather than Peemans in Brussels (correspondence, 2009). (Helen Wyld, 2009)