The Triumph of Marcus Aurelius (fragment) 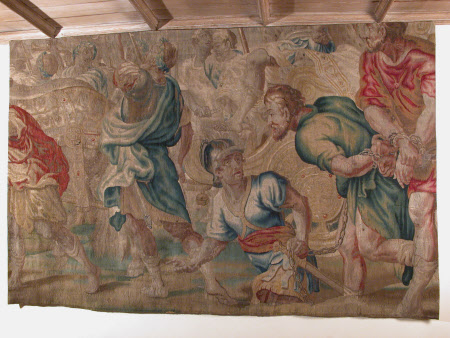 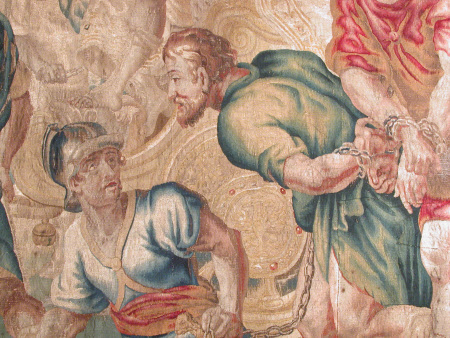 Tapestry, wool and silk, 7-8 warps per cm, The Triumph of Marcus Aurelius from a set of two of the History of Marcus Aurelius, workshop of Michiel Wauters after a design by Abraham van Diepenbeeck, c. 1660-1679. A rectangular panel cut from a larger piece. In the foreground to the right of centre is a Roman soldier wearing armour and a helmet and walking down steps, with only the top half of his body visible. He turns back to look at two prisoners whom he leads on a chain tied around their wrists. To the left of the soldier is a man wearing a green cloak and a laurel wreath holding up a standard which disappears above the edge of the tapestry, and another figure wearing red is cut off on the far left. Behind the figures is a chariot drawn by two horses and ridden by the triumphant figure of Marcus Aurelius, whose legs are visible but his body is cut off by the top of the tapestry.