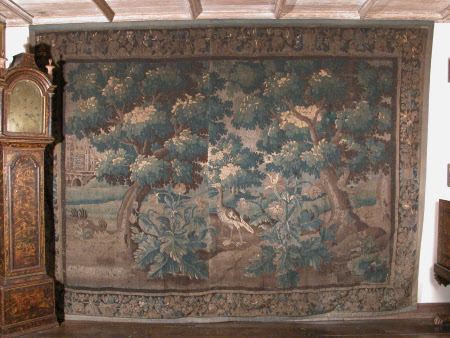 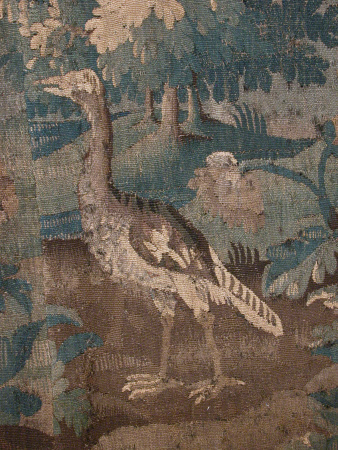 Tapestry, wool and silk, 3½-4 warps per cm, Verdure with Bird, Aubusson, c. 1650-1700. A verdure tapestry with a vertical join down the centre. The upper part of the tapestry is taken up with the foliage of two large trees, and in the foreground are two flowering plants and a bird on a brown ground. Beyond the trees on the left is a castle above a bridge. The border is composed of flowers and scrolls mainly in blue and beige, with a wide band of beige and dark brown on the inside of the border. The tapestry is coarsely woven and has a number of repairs. A pale brown wool repp galloon has been attached around all four edges.Replacement blue wool galloons have been attached around all four edges.

The large foreground plants, dense foliage in the background, distant buildings glimpsed through the trees, and prominent foreground bird are typical of verdure tapestries woven in both France and the Netherlands in the late seventeenth and early eighteenth centuries. This tapestry can be fairly securely attributed to the French weaving centre of Aubusson on the basis of the design. The small castle is typical of Aubusson verdures. Similar patterns of flowers and scrolls are found on a number of Aubusson tapestries, for example a group of verdures in Wawel Royal Castle, Cracow (Hennel-Bernasikowa 2000, cat. nos. 45, 53, 54), and a number of other examples in French museums and private collections (Chevalier, Chevalier and Bertrand, pp. 54-56). (Helen Wyld, 2009)