Self-portrait at the age of 22 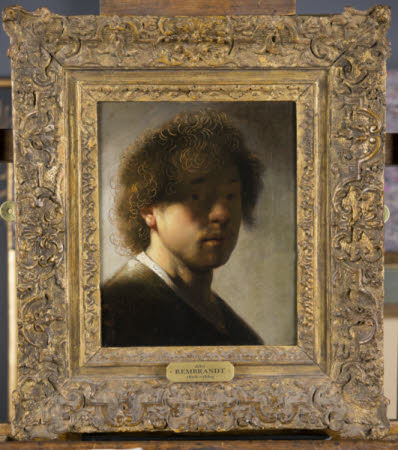 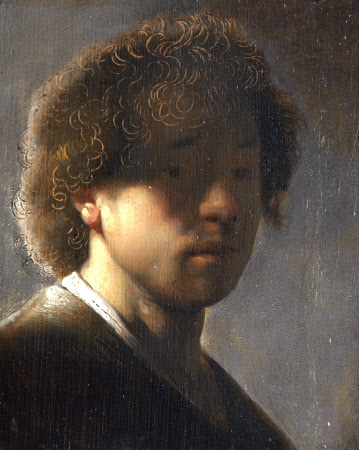 Sir John and Lady Heathcoat Amory, the last generation of the family to live at Knightshayes, bought this painting in 1948 as an original work by Rembrandt van Rijn. In subsequent years, it was reattributed as a copy of Rembrandt’s Self-portrait of c. 1628, now in the Rijksmuseum in Amsterdam. In 2018, art historian Bendor Grosvenor suggested that the Knightshayes picture could in fact be a study by Rembrandt for the finished Rijksmuseum picture. The painting became the subject of a ‘Britain’s Lost Masterpieces’ programme, first broadcast on 15 August 2018. As part of the programme, the picture underwent cleaning and scientific analysis. Later layers of overpainting were removed from the background, revealing its true quality as an early 17th-century Dutch work of art. Dendrochronology (tree-ring) analysis showed that the oak panel on which the picture is painted dates from the 1620s and is from the same tree as another version of the picture in the Gemäldegalerie Alte Meister in Kassel, Germany. Examination of the ground layer applied to prepare the panel for painting showed it is the same technique used in Rembrandt’s studio. All this provided compelling evidence that the picture was painted in Rembrandt’s studio. Grosvenor continues to believe that the painting is by Rembrandt, but Ernst van Wetering, the leading authority on Rembrandt, is unconvinced. Further research will hopefully uncover more about this picture and its relationship to the Rijksmuseum Self-portrait.

Oil painting on panel, Self-portrait at the age of 22 by studio of Rembrandt van Rijn (Leiden 1606 – Amsterdam 1669). A man with tousled hair shown in three-quarter view with face and shoulders.

Edward Speelman, London, bought at Agnews on 21 April 1948, by whom sold to Sir John Heathcoat Amory on 4 June 1948; bequeathed to the Knightshayes Garden Trust on his death in 1972.