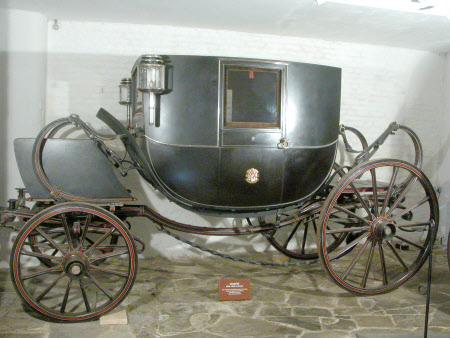 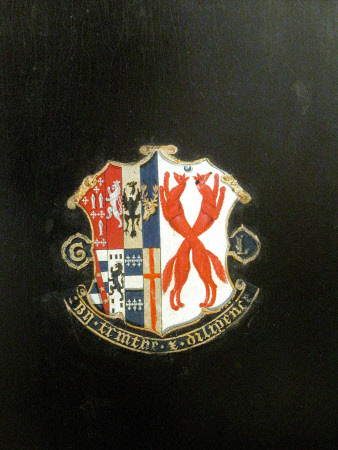 Charlecote Park's travelling coach is slightly unusual as it was built to travel both around town and in the country. When in the town the coach could be 'dressed up' with a fine hammer cloth over the coachmans seat. The coachman and the footmen would be dressed in full livery. For travelling to the country a 'boot' for the storage of luggage would have been added and the coach 'dressed down' in plainer, coarser dressings. Travelling coaches were a comfortable carriage to travel in as the body was sprung on 'Whip' or 'C' springs. These helped to make the bumps of the poor road surfaces less obvious to the passengers. They were also spacious inside allowing the passengers to lie flat to sleep. Built by Wyburn & Meller in circa 1845 for George Lucy, this carriage is painted in black and brown and carries the Lucy family crest.

Travelling Coach built by Wyburn & Meller for George Lucy circa 1845. According to Lady Alice Fairfax-Lucy the coach was ordered by George Lucy when he was asked to be the High Sheriff for the second time. By the time it was delivered he was dead and Mary Elizabeth had to pay for it which she was rather cross about. Mary Elizabeth insisted on taking it on visits to Cornwall and the Highlands. Travelling Coach (four wheels) for a pair or team of horses. Suspended on C springs and under springs and with Collinges patent axles. The interior is upholstered in brown ribbed silk decorated with broad laces bearing heraldic motifs. The roof, upper panels, underside of the body are black and the lower panels brown with fine white lines. There is a coat of arms with the initials GL on the door panels and the front and back lower panels.

This carriage is convertible for town use and for travelling and would originally have been equipped with a full set of both “town furniture” and “travelling furniture”. All that survives of the travelling furniture are the the trunk boot which is mounted on the front beds and the dashboard. When it was used for travelling around town, the coach would have been 'dressed up' with a coachmans seat and cushions of a finer textile to those used in the country so that it could have been driven by a coachman in full livery. In this configuration the dashboard would have been removed. Further evidence that this carriage could be used for town driving is provided by the hole in the top of the nearside front pillar, which would have been used for a communication cord. When travelling, the trunk boot, probably incorporating a rumble seat for two servants, would have been fitted on the hind footboard.

Given to the National Trust 1945