A Bird's-eye View of Charlecote Park, Warwickshire from the West 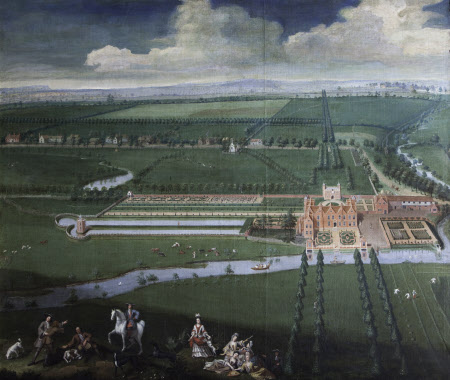 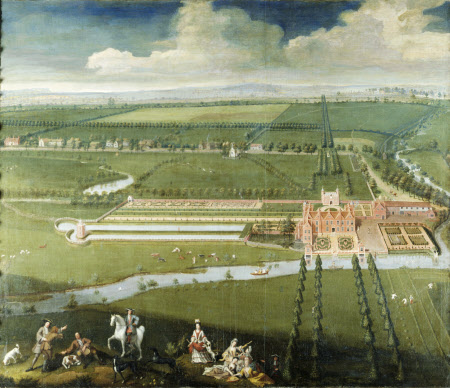 This is an aerial view of the Charlecote house, park and surrounding countryside seen from the west side of the river Avon. It shows the formal garden before it was removed by ‘place-maker’ Lancelot ‘Capability’ Brown (1716 - 1783) in about 1760 and further drastically restored in mid-19th century. Tree-lined avenues stretch to the horizon in the east and west and diagonally across the park to St Leonard's Church in the middle ground. On an escarpment in the immediate foreground, are the owner, Colonel George Lucy (d.1721) who succeeded in 1690, on a white stallion and his wife, Mary Bohun (d.1708) with family and friends and their dogs. The scene was once thought to be painted by Jan Stevens (d.1722) and dated 1696 but there is no evidence to support either fact. It is amazing to see the artist creating a bird’s-eye view 200 years before the advent of aeroplanes.

Oil painting on canvas, A Bird's-Eye View of Charlecote Park, Warwickshire from the West, British (English) School, circa 1696/1700. An aerial view of the house and gatehouse beyond, seen from the west side of the River Avon, showing the formal garden (laid out by Captain Thomas and Colonel George Lucy but which was removed by Capability Brown in about 1760), park and surrounding countryside. On the left, at the end of a long bank, between two fish breeding ponds running north from the house, is an octagonal brick gazebo – this was used for dining in summer and fishing from in the winter. Parallel with the ponds behind are parterres with box trees, alternatively clipped into cones and balls, in the Dutch style. In the foreground are two smaller parterres between the west front and steps down to the river. On the right is a walled garden in the angle of the Avon and the Dene. Tree-lined avenues stretch to the horizon in the east and west and diagonally across the park to St Leonard's Church in the middle ground. The figures, sitting on an escarpment, in the immediate foreground, are Colonel George Lucy, owner of Charlecote, on a white stallion and his wife, Mary and family with their dogs. There are small boats on the River Avon and animals grazing by the side of the river. This view shows the Elizabethan west front before the addition of the Victorian Library and Dining Room in the 1830s. In a large rectangular gilded frame. Given to Colonel George Lucy (d. 1721) by his brother Reverend William Lucy (d. 1723) who afterwards succeeded him at Charlecote; according to Mary Elizabeth’s journal