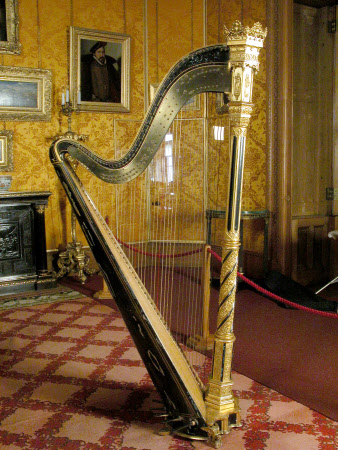 This Erard harp belonged to Mary Elizabeth Lucy. She is said to have played the harp beautifully having been tutored by Queen Victoria's harpist, John Thomas, who was often at Charlecote.

Wooden harp, painted black and gold with flecks of blue evident in places. Pillar is surmounted by a gilt coronet, it also features numerous panels with figures and a plaque ‘Pierre Erard Established Dec 10 1835’. The pillar also features a twisted section with carved foliage. The base of the pillar also contains plaques ‘December 10 1835’. The two front feet are in the form of winged griffins. Main body of the harp is also in gilt with brass fixings. Brass plate is engraved ‘Sebastian and Pierre Erard’s. Patent No 5618. 18 Great Marlborough Street London’. It has 8 metal pedals, four on each side which is apparently an unusual feature. It also features coloured strings to denote the changes in the octaves. Believed to have been Mary Elizabeth Lucy's harp, made in 1854