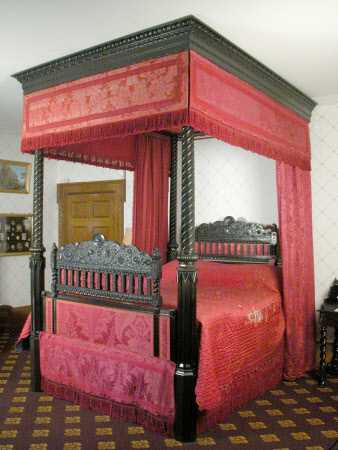 The Lancaster State Bed, made in England, circa 1815, for William Beckford (1760-1844). Created for the Lancaster Bedroom at Fonthill Abbey. Incorporates a headboard and a footboard from the Coromandel coast, carved in ebony circa 1666 - 80. The carvings feature a foliate design and have finials in the shape of winged bird. The spirally turned baluster shaped bed posts are mounted on octagonal sections with Gothic mouldings, they support a neoclassical cornice made for Charlecote to match the door surrounds of the bedroom. The cornice is fitted with a metal curtain rail with metal rings. Also includes the two original red silk damask hangings, a blue and red quilted bed cover, pillows and a mattress. The bed was purchased in 1837 by George Hammond Lucy through English, the Bath Auctioneers. English's bill dated June 1837 reads 'To the Lancaster State Bedstead and hangings formerly at Fonthill - also a paliasse - 2 mattresses - feather bed bolster & two pillows & silk Quilt £ 136.10.0'. The bed appeared in the Fonthill Abbey sale catalogue but was brought to Bath by Beckford until sold for Charlecote. There was a comparable but more elaborate bed at Hamilton Palace, made up in England in the beginning of the 19th century with a seventeenth century footboard from the Coromandel Coast. It was sold by John Webb of Bond Street to the 10th Duke of Hamilton in 1826 or 1828 (See A.Jaffer, fig.66). The mid-seventeenth century ebony furniture produced in the Coromandel coast of India was very fashionable in the early years of the 19th century, especially sets of carved ebony chairs. In the 1750s, Horace Walpole (1717-1797) acquired many pieces of such carved ebony furniture for his Gothic house of Strawberry Hill. He believed they were surviving examples of early English furniture. William Beckford also had several examples of carved ebony chairs and cabinets at Fonthill Abbey. At Charlecote a few specimens can still be found (NT 533024.1-2; NT 533025; NT 533026) including a sofa (NT 533023). Located in the Ebony Bedroom (created specially to house this bed) in the 1850s and listed there in an inventory of 1891: 'Bed - The Fonthill including bolster and 2 pillows'.