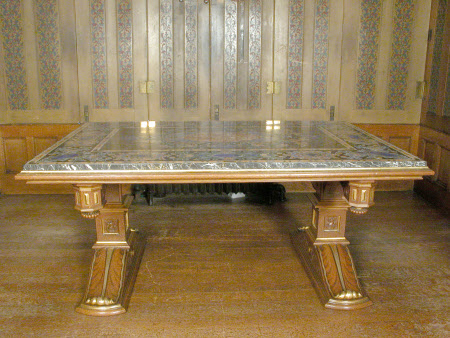 Table top: the base slab is Carrara marble, the edging is of Portor marble, the top veneered with a ground of Breccia di Tivoli (centre) and black Belgian marble (border) inlaid "a commesso" with various marbles and hardstones including : Alabaster, Brocatello, Bianco e nero antico, Giallo antico, jasper, agate and lapis-lazuli; Table base: carved oak, parcel-gilt

A pietre dure table top, Rome or Florence, circa 1610, raised on a carved and parcel-gilt oak table made circa 1824 after the "Borghese/Beckford" pietre dure table base (NT 532954) and bearing the Lucy cross crosslets as opposed to the Beckford Latimer cross on the latter. The table top is centred by an oval of alabaster fiorito issuing radiating festoons of lapis-lazuli within a strapwork-shaped cartouche of Brocatello and lapis-lazuli incorporating a few bouquet flowers in vases, on a background of Breccia di Tivoli, the borders are inlaid with scrollwork cartouches of alabaster, lapis-lazuli, bianco e nero marble, green jasper and Brocatello, the overall composition is surrounded by a frieze showing a complex geometrical design on a Giallo antico background. This splendid pietre dure table originally took pride in the Great Hall, near the "Beckford/Borghese" table purchased a year earlier (NT 532954). It was moved to the Library in 1858, displaced by the Baldock sideboard when the Charlecote Buffet took its place in the Dining Room. It was acquired by George Lucy (1789-1845) in 1824 from Thomas Emmerson, a London picture dealer established at 20 Stratford place and from whom the Lucys had purchased paintings. In his letter dated 13 January 1824 he writes concerning the table: "chance has thrown in my way a remarkable fine Florentine [in fact Roman] slab, which I have secured - it has just been cleared from the Customs House by a merchant in the City and I had intelligence of it from my broker before it has been seen by any person (...) with the exception of yours [the Beckford/Borghese table NT 532954] which I consider unique and remarkable, it is the finest I know - the design and colour are beautiful and the materials most precious (...) in short it is worthy to be in the same mansion with "The Table". It was met with by accident in Germany where it had been many years in the family of an Italian Banker (...) - the price is Five Hundred Guineas which I consider very cheap...I think a stand might be made for it in the country from your own which would serve as a model". The table was purchased and a table base was made as suggested by T. Emmerson. As stressed by C. Wainwright :"The top is certainly one of the most interesting and important in England and, though much smaller than the Borghese Table, is of a more interesting design". Indeed its design is original and can be compared to a table dated circa 1610 and possibly Florentine kept at Hatfield House (Hertfordshire). The overall composition issues from Roman table tops dated circa 1570 showing a central circle or oval surrounded by a double border of scrollwork. The closest in composition might be the one formerly in the collection of cardinal Richelieu and today in the Musée du Louvre (MR 450), also showing a great proportion of alabaster and lapis-lazuli and a comparable shaped oval centre with radiating festoons. Another example illustrated by A.M Giusti, a table top in the Palazzo Ducale in Mantua, that she dates around 1570 has a central oval of alabaster fiorito enclosed by a similar interlaced framework. These few tables are thought to be inspired from designs by Jacoppo Barozzi da Vignola (1507-1573), notably his designs for The Farnese Table dated circa 1565 (Metropolitan Museum inv.58-57a-d, previously in the Hamilton collection).

Acquired by George Lucy from the dealer Thomas Emmerson in 1824. Charlecote Park, Great Hall. Illustrated in a lithograph by F W Hulme after J G Jackson (1845) and in The Baronial halls and Picturesque Edifices of England by S.C Hall (1848). Moved to the Library in 1858. Presented to the National Trust by Sir Montgomerie Fairfax-Lucy (1896-1965), two years after the death of his father, Sir Henry Ramsay-Fairfax, 3rd Bt (1870 – 1944), with Charlecote Park and its chief contents, in 1946.