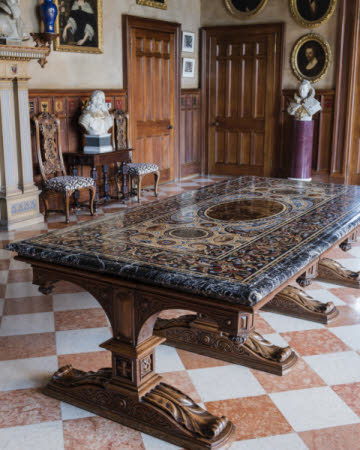 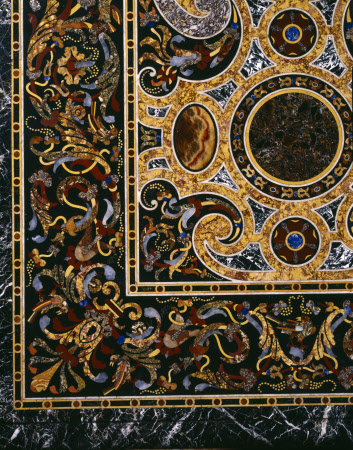 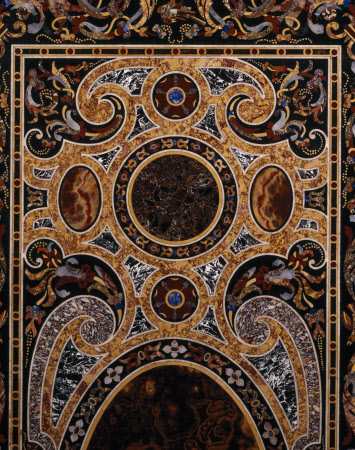 This superb 16th-century table top is made of pietra dura (literally 'hard stone') - a technique using inlaid coloured marbles and semi-precious stones perfected in Italy. It is reputed to have been removed from the Borghese Palace in Rome during Napoloeon's Italian campaign in 1796 and taken to Paris where it was bought by William Beckford to furnish Fonthill Abbey in Wiltshire. When Beckford was forced to sell Fonthill Abbey and most of its contents in 1822, George Hammond Lucy was one of the most enthusiastic buyers at the sale, acquiring exotic furniture, ceramics and metalwork for Charlecote, including this tabletop.

A pietra dura centre table consisting of a pietra dura table top, Rome, circa 1600, raised on a carved oak base.

The table top is of geometric design with a central oval of alabaster "Tartaruga" (typical tortoiseshell effect) flanked by two roundels of marble of Breccia di Tivoli or Quintilina (found in the ruins of the villa of Quintilus Varrus in Tivoli in 1565), framed within cartouches of strapwork of Broccatello, Semesanto and Bianco and nero antico marble. These features are typical of Rome and distinguish this table top from Florentine examples. However, the foliate scrolls and sprays issuing strings of pearls and including birds and snails inlaid with marble and semi-precious stones such as lapis lazuli and Sicilian jasper on a black Belgian marble ground are reminiscent to the compositions mastered by the Opificio delle pietre dure inspired by ancient Roman mosaics. The oak stand consists of four platform base legs which bear William Beckford's Latimer Cross. The legs also have inverted finials to each leg.This table was made for William Beckford (1760-1844), circa 1820 and then later acquired by George Hammond Lucy (1789-1845) at the legendary Fonthill Abbey sale held by Harry Phillips in 1823. It was described in the catalogue as follows (lot 446): “a magnificent table of Pietre Commesse, the centre being an oval specimen of mammilated oriental onyx, surrounded by parterres of rare and beautiful jaspers and breccia, with a border of bold arabesque of various costly and uncommon marbles belted with variegated marble. It is mounted on a superbly carved frame of oak, about nine feet long and four feet six inches wide". Mary Elizabeth Lucy (1803-1883) recalls in her diary the visit of Prince Doria (1813-1876 - Filippo Andrea Doria-Pamphili Landi, XI) who admired the table "which had originally stood at the Borghese Villa at Rome, and from whence it had been taken by the French in the time of Napoleon". It is not known when Beckford acquired the pietre dure top. It perhaps arrived at Fonthill after 1812 as it is not mentioned in James Storer book published that year "A description of Fonthill Abbey" (see C. Wainwright). The table stood in King Edward's Gallery at Fonthill Abbey as illustrated in 1823. The oak stand bears William Beckford's Latimer Cross which also appeared on the ceiling panels and beside the fireplace as well as on the six Gothic side tables in King Edward's Gallery at Fonthill. Therefore they are thought to have been designed especially for this room. The six Gothic tables also went to Charlecote and can be seen in the Great Hall (NT 532955.1-4; NT 532956.1-2). The Latimer cross is similar to the Cross Crosslet of the Lucy crest and might explain why George Hammond Lucy kept the Gothic base and acquired the side tables. George Hammond Lucy paid 1,890 guineas for the table, by far his most expensive purchase at the sale. As stressed by A.Turpin (2001, p.193) it was one of the most expensive items of any type sold in Beckford's lifetime. In her biography (1862) Mary Elizabeth described the auction vividly: "the table, for which there were many bidders; but the most formidable was the King, George the Fourth, and the Marquis of Westminster. It was "going, going", many times, but when the sum mounted up to one thousand eight hundred guineas there was dead silence; and George Lucy being the last to call out so high a figure, the table was his". It is shown as it still stands today in the lithograph depicting the Great Hall at Charlecote, dated 1845, by F W Hulme after J G Jackson. A remarkably similar table top, following a nearly identical design but slightly smaller, also in the National Trust Collections, can be seen at Powis Castle (NT 1181054). It is family tradition that the Powis table was also from the Borghese Palace in Rome and came to Powis as a gift from Pope Innocent XI. There is a family connection to the papal court to suggest this provenance. The Earl of Castlemaine, nephew of the 1st Marquess of Powis, conducted an embassy from King James II to Pope Innocent XI, after being appointed the King’s ambassador-extraordinary in 1685. The Powis table top is still supported upon its original wooden base in the form of an inner Ionic temple with six zoomorphic lion supports. This base is exceptional not only because many pietre dure table tops were exported from Italy without their supports but also because it is of wood rather than stone and retains its original gilding and faux porphyry decoration. Two other comparable pietre dure table tops are known, one is in the Palazzo Ducal in Mantua. The design is similar although the cartouches scrolls are slightly different in shape and a few birds can be found in the central panel but not in the foliate borders. The various marbles in use are different. The other top is in the Metropolitan museum, New York (inv.62.259), the selection and arrangement of the marbles is similar although the design varies, notably the cartouches scrolls which are made of two different kinds of marble: Brocatello and Bianco and nero antico (four are used on the Charlecote table). The foliate borders also follow a comparable but different design, again the birds are part of the central rectangular panel. A.M Giusti refers to this group of tables as "three great sister tables" (in fact "four" in adding the Powis table). She suggests that the similarity between them is such that they may derive from a single cartoon (design), "the individuality of single pieces being safeguarded by the use of different stones to produce quite different combinations of colours". They are thought to be characteristic of the early seventeenth century as the scrollwork or strapwork cartouches take over the central rectangular panel. The same motifs appear in the borders of earlier Roman table tops dated from the late sixteen century (see an example in the J.Paul Getty Museum (inv.92.DA.70.a). Camille Mestdagh (2016)