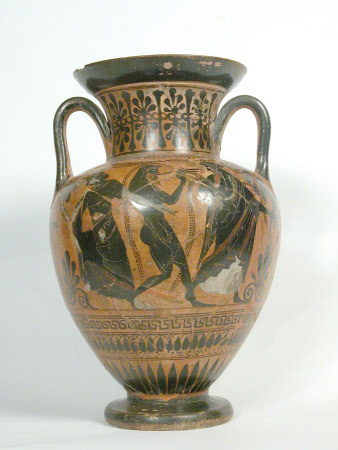 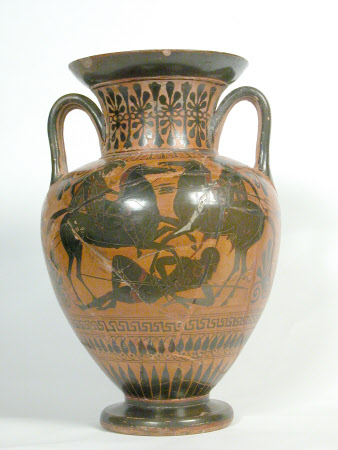 Neck amphora, black-figured. On one side, an Amazonomachy with mounted Greek and mounted Amazon, and a Greek fallen, on the other side, Dionysos with satyr and Maenad. Late 6th century BC. Athenian black figure vase – early 5th Century BC. The obverse image is a warrior and Amazon on horseback with a fallen warrior. On the reverse, Dionysos, carrying a drinking horn moves to the right followed by a satyr playing the double flute and a Maenad. Circular base, pelike style vase with wide rim and two handles. George Hammond Lucy, having been given by Lord Brooke of Warwick, a catalogue of Greek Vases and other artefacts to be sold in London, purchased some of the vases which are now in the Library. On 12 July 1838 he paid to Messrs. Brown, Scagliola Works, University Street, London, the sum of £125 for four vases. Some of the other vases were bought in Italy in 1842.