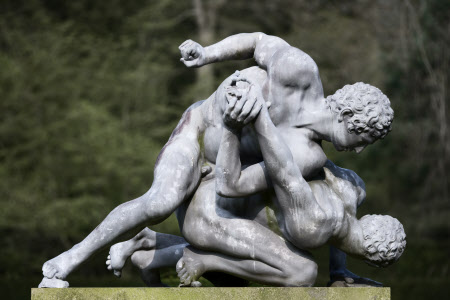 The Roman group is thought to be a copy of a lost Hellenistic bronze, possibly school of Lysippus, and was discovered, along with the Niobe group (Uffizi, Florence), in 1583 near the Porta San Giovanni, Rome. On 25 June of that year both groups were purchased by Cardinal Ferdinando de' Medici and installed in the Villa Medici before being removed to the Tribuna of the Uffizi in 1688. The Wrestlers was widely copied, a cast being ordered for Philip VI of Spain in 1650 and copies in marble being produced for Louis XIV for Versailles and Marly in the 1670s and 80s. Copies in bronze were made by Soldani and in lead by Andrew Carpenter. A price list submitted by Carpenter to Lord Carlisle shows that the 'Roman Wrestlers' was produced for Castle Howard in 1723 at the cost of £20. The rendering of anatomy in The Wrestlers was considered of great academic value: the musculature was analyzed by Flaxman in his Royal Academy lectures, a terracotta study was made by Canova, and Pierre Subleyras closely studied the group in a painting which features his Artist's Studio of 1746 (Akademie der bildenden Künste, Vienna). Alice Rylance-Watson January 2019