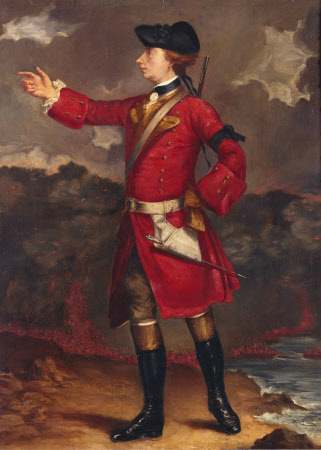 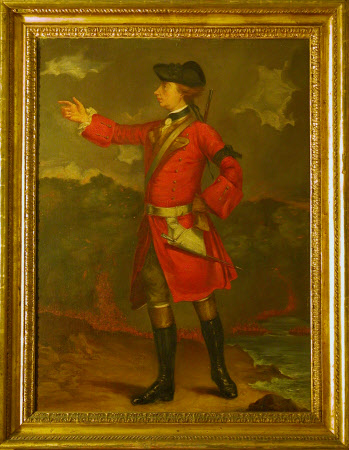 A painting of General James Wolfe after J.S.C Schaak’s 1766 painting based on the sketch by Wolfe’s Aide de Camp Hervey Smyth. Wolfe is shown with a black arm band on his arm to mark his mourning the death of his father. Wolfe died at the Battle of Quebec in 1759, the same year as his father.

Oil painting on canvas, General James Wolfe (1727-1759), after J. S. C. Schaak (fl.1761-1769). Full-length portrait, turned to the left, left profile, his right hand gesturing in front of him pointing with his right index-finger, his left hand on his hip, wearing scarlet military coat and knee-length black boots. The occasion is the Storming of Quebec. This is a modern copy of a portrait, signed and dated 1766, which was formerly at Goodwood. Same as glass picture in hall (original painting in possession of Captain Hervey Smyth).

(Formerly part of the Wolfe-Aylward Collection of 'Wolfiana') Mr Wolfe-Aylward, from whom bought by Quebec House Committee, 1930