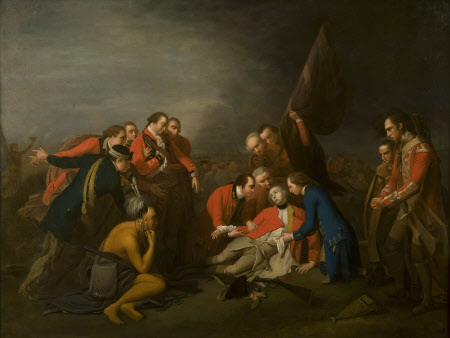 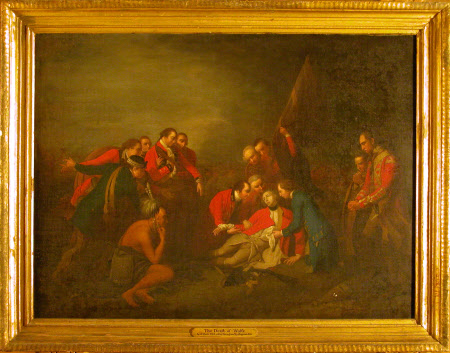 A reduced sized version of Benjamin West’s famous painting ‘Death of General Wolfe’. This version, by George Roth, shows Wolfe dying having lead the British Army to victory at the Battle of the Plains of Abraham in 1759. Although similar to West’s original, Roth added to the emotion of the painting by adding more tears to the eyes of the soldiers gathered around Wolfe as well as adding to his wounds.

This reduced size version of Benjamin West’s ‘Death of General Wolfe’ was for many years considered to be by the artist until cleaning revealed the signature of George Roth and the date 1784. West’s masterpiece was in such demand that he himself painted at least six large versions as well as a number of smaller copies. Public demand was not satisfied by ownership of Wollett’s engraving and many other artists produced their own versions of West’s painting. Superficially identical, Roth has emphasised the emotive elements to add further drama to West’s work; the soldiers looking on in adulation now have more pronounced tears in their eyes, Wolfe’s wounds are more severe, the bandages have more blood with blood even dripping to the ground from the wound in Wolfe's chest.