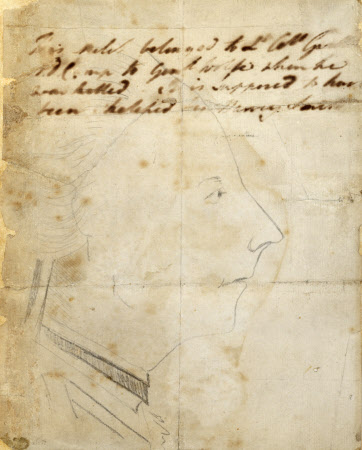 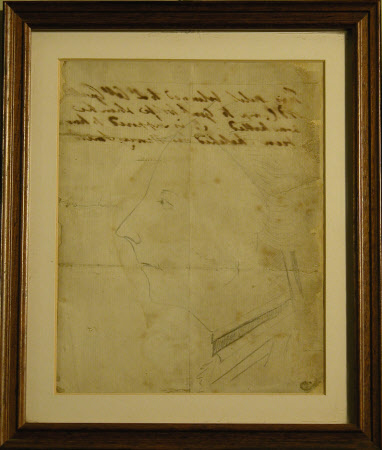 A pencil sketch of General Wolfe, by his aide de camp Captain Hervey Smyth shortly before the attack on the Heights of Abraham during the Battle of Quebec in 1759. It is possible that this is one of only two known sketches of Wolfe drawn during his life.

Pencil sketch of General Wolfe, by Captain Hervey Smith, Wolfe's aide de camp, on a page torn from field pocket book shortly before the attack on the Heights of Abraham. It then came into the possession of Colonel Gwillian, another of the General's ADC's, who died afterwards at Gibraltar. It was formerly in the collection of the Royal United Service Institution. Only two sketches of General Wolfe appear to have been drawn from life, this one and another that appears to have been drawn by William DeLaune inside a copy of ‘A Treatise of Military discipline’ given to him some years before by General Wolfe that is now in Library and Archives Canada. Ambiguity surrounds the dates of each of the studio portraits of Wolfe and it may well be that these two sketches are the only en vitae images of him to survive. When Wolfe’s body was returned to England Joseph Wilton was sent to make a plaster mask. However, he found the face to be too distorted to be of use and a life mask was taken of a servant of Lord Gowers who bore a resemblance to Wolfe. Smyth's sketch was used to help correct this image to a better likeness. It is Wilton’s interpretation that in turn has informed the post mortem images of Wolfe.

Presented to the Trust in 1963 by the Royal United Service Institution, Whitehall.

(on reverse) This sketch belonged to Lt. Col. Gwillim. A.D. Camp to Genl. Wolfe when he was killed - it is supposed to have been sketched by Hervey Smyth! (continued in pencil in another hand) This profile of General Wolfe from which his bust was principally taken was hastily sketched by Hervey Smith on[e] of Aid de camps, a very short time before that distinguished officer was killed on the Plains of Abraham (sic) it then came into the possession of Colonel Gwillian another of the General's Aid de camps, who died afterwards at Gibraltar; and from him to Mrs. Sinclair, the Colonel's only daughter and heiress then to Major General Darling (who was on General Sinclair's Staff); and is now presented by him to His Grace the Duke of Northumberland, Alnwick 13th July 1832. (1832). (In still another hand is added that H.G. the Duke of Northumberland presented it to the Royal United Service Institution, Whitehall, who presented it to Quebec House in 1963.)