Amulet for protection against the evil eye 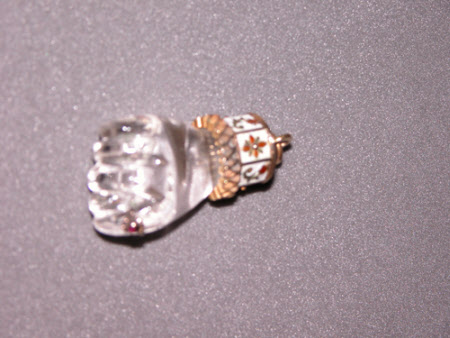 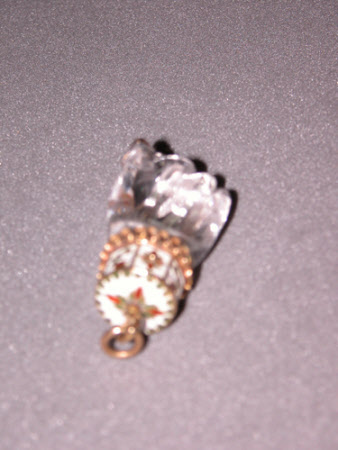 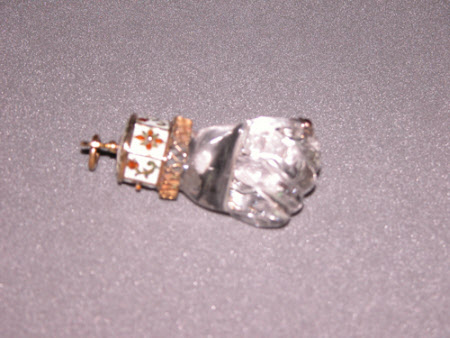 Crystal, gold, enamel, an amulet for protection against the evil eye, Spanish or Southern Italian, c. 1550-1650. An amulet in the form of a clenched right hand, the thumb and first finger curling to form the 'mano fico' gesture, a silver ring on the first finger. Mounted onto a gold sleeve enamelled white and green, with a frilly cuff and rectangular panels, the ground in white enamel and raised flower designs in green enamel and plain gold. Suspension loop.

This beautiful and refined amulet shows a mano fica, with the thumb held within the curled index and middle fingers. The Italian phrase 'mano fica' literally translates as ‘hand fig’, the word 'fico' for fig being slang in Italian for the female genitals. The gesture, which alludes to heterosexual intercourse, can therefore be used in a vulgar and offensive manner, but its principal use, as here, was for protection against the evil eye. In earlier centuries, the notion was widespread that the power of the evil eye resided in certain unlucky individuals, known in Italian as 'jettatori' (‘throwers’). The evil eye was often generated by envy and was believed especially to harm forces of generation - nursing mothers, milking animals fruit-bearing trees, male sperm. This belief goes back as far as Roman times, when the fig sign (manu ficu) was made by heads of families in order to ward off evil spirits. Mano fica talismans are known from ancient times and from various civilisations, but have always been especially popular in the Mediterranean region (Liselotte Hansmann and Lenz Kriss-Rettenbeck, Amulett und Talisman. Erscheinungsform und Geschichte, Munich 1977, pp, 258-59, figs. A640-56). Amulets such as the example at Anglesey Abbey were often given to children to wear. An example in jet, in the Ashmolean Museum, Oxford, is recorded in the 1656 catalogue of the Tradescant collection, Tradescant’s Rarities, as ‘A Hand of Jet usually given to Children, in Turky, to preserve them from Witchcraft.’ (Arthur MacGregor, ed., Tradescant’s Rarities. Essays on the Foundation of the Ashmolean Museum 1683, with a Catalogue of the surviving early Collections, Oxford 1983, pp. 249-51, no. 190, fig. 55). There is another seventeenth-century one in the Museo Regionale Pepoli in Trapani made in coral, with the hand carved with a sleeve (Maria Concetta Di Natale and Vincenzo Abbate, eds., Il Tesoro Nascosto. Gioie e Argenti per la Madonna di Trapani, exh. cat., Museo Regionale Pepoli, Trapani 1995, p. 140, no. I.45). The amulets were especially popular in Spain, where they were known as higa [per na ser vaidas] (W.L. Hildburgh, ‘Images of the Human Hand as Amulets in Spain’, Journal of the Warburg and Courtauld Institutes, 18 (1955), pp. 67-89, esp. 79ff.), and were the most-used type of protective amulet among all levels of society (Letizia Arbeteta, La Joyería Española en los Museos Estatales, de Felipe II a Alonso XIII, Madrid 1998, p. 92, no. 20). There is a Spanish 16th-century example in the British Museum, made of ivory and wearing two rings, mounted in filigree enamelled gold (Inv. BEP 1941.1007.1. Hugh Tait, ed., Seven Thousand Years of Jewellery, London 1986, p. 212, fig. 525.). A closely similar example in rock crystal, with a gold mount in the form of a frilly cuff, has been tentatively called German, but seems more probably Spanish (Hansmann and Lenz-Rettenbeck, p. 320, fig. A640). A sixteenth-century rock crystal and gold example in the Museo Lazaro Galdiano is close to the design drawing for a higa by the Barcelona goldsmith Pera Estivill, from c. 1580 (Priscilla E. Muller, Jewels in Spain 1500-1800, New York 1972, p. 69, figs. 94-95). Such objects continued to be made through the succeeding centuries and into modern times; another rock crystal hand in the Museo Nacional de Antropologia is dated to c. 1800 (La Joyería Española, no. 20). Higa amulets can be seen worn in portraits of grand Spanish children, for example a portrait from 1602 of the Infanta Ana (Anne of Austria, 1601-1666) by Juan Pantoja de la Cruz, in the Monastero de las Descalzas Reales in Madrid, shows the infant, bedecked with reliquaries and amulets, including a higa suspended from her waist (Tait 1986, p. 213, fig. 528). Jeremy Warren 2018

Purchased by Urban Huttleston Rogers Broughton, 1st Lord Fairhaven (1896-1966) from David Black on 19 August 1949, ‘A Crystal and Gold Renaissance Hand. Italian 1560’ for £65; bequeathed 1966 to the National Trust by Lord Fairhaven with the house and the rest of the contents.