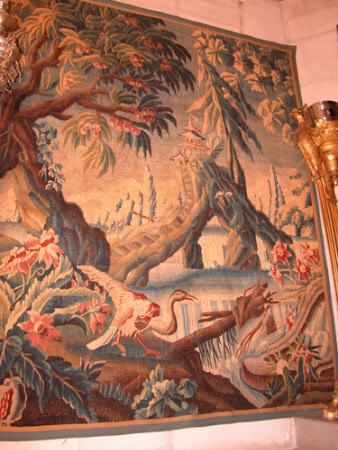 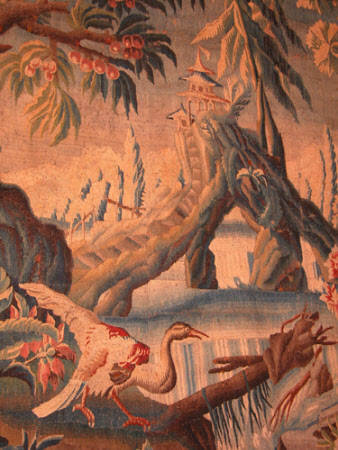 Tapestry, wool and silk, 4½ warps per cm, Exotic landscape, probably Aubusson, c. 1710-1740. A landscape with a fantastical island in the centre forming a raised bridge over a lake. A long flight of crooked steps runs up the left side of the island leading to a small pagoda-like structure on the summit and two tall pine trees. A large tree with red fruit fills the left side of the tapestry, and in the foreground on the bank of the lake there is a plant with red flowers, a large red, blue and brown bird and a moss-covered log overhanging the water. On the right hand side there are more red flowers and overhanging foliage, and trees on the distant shore of the lake. The tapestry has no borders and a blue and yellow galloon has been applied around all four sides.

The tapestry was made at Aubusson in the first half of the eighteenth century. Tapestries with exotic landscapes and buildings had been popular in France since the 1690s, when a series of the 'Story of the Emperor of China' was woven at Beauvais (Standen, 1976). In the early eighteenth century tapestries with 'chinoiserie' designs were introduced at Aubusson. Some of the Aubusson designs take elements from the earlier Beauvais series but the Aubusson tapestries are quite different, predominantly landscape compositions often with outlandish natural features as in the present example, exotic plants and birds, and fanciful elements of 'Chinese' architecture sometimes based on printed sources. The pavilion atop its bridge-shaped rock in the present tapestry may derive from the 'Gedenkwaerdig bedryf der Nederlandsche Oost-Indische Maatschappye, op de kuste en in het keizerrijk van Taising of Sina' (Memorable mission of the Dutch East India Company up the coast and into the empire of Taising or China), Amsterdam, 1670, which was published in English in 1670 and 1673 as 'Atlas Chinensis', and spuriously attributed to Arnoldus Montanus. The large number of surviving Aubusson 'Chinoiserie' tapestries gives an indication of the popularity of the genre in the eighteenth century (see for example Standen 1985, vol. II, cat. no. 95, pp. 620-1; Bennett 1976, cat, no. 71, pp. 230-1; Aubusson 1983). (Helen Wyld, 2011, with advice from Emile de Bruijn)