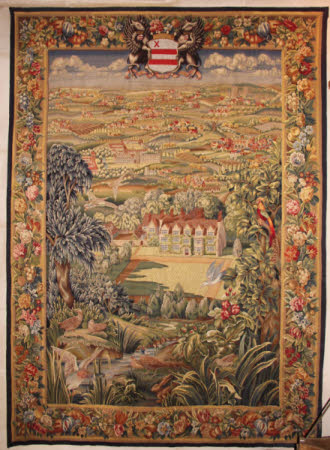 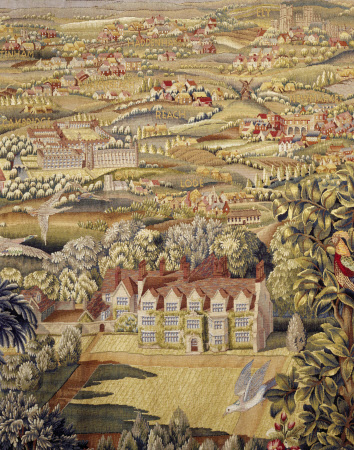 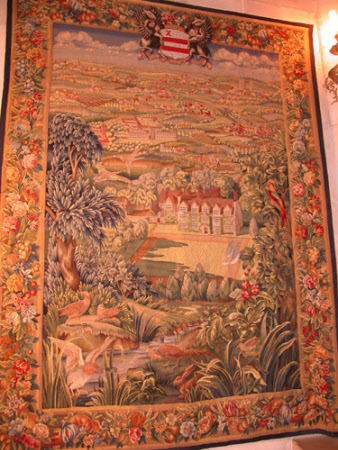 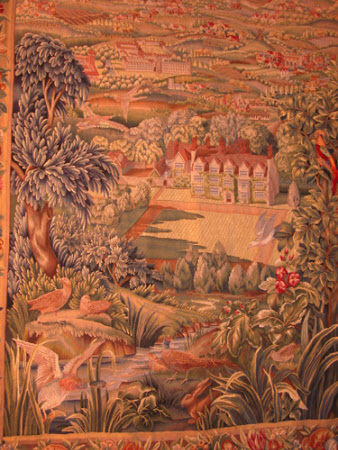 Tapestry, wool, silk and metal thread, 5 warps per cm, Anglesey Abbey, Cambridge Tapestry Company, 1934. An aerial view of a Cambridgeshire landscape with Anglesey Abbey and its garden in the centre, a stream running through a wooded landscape in the foreground and a landscape stretching into the distance dotted with Cambridgeshire landmarks, each of which is named. The borders are composed of leaves, fruit and flowers on a light brown ground, and the arms of Lord Fairhaven appear in the upper centre. The tapestry is signed with the 'CT' monogram of the Cambridge tapestry company and dated 1934. It is lined with blue linen, stitched in diaper pattern and hung on poppers (presumed the original lining and hanging mechanism).

The tapestry of 'Anglesey Abbey' was commissioned by Lord Fairhaven from the Cambridge Tapestry Company in 1934 and was designed by Clifford Barber (Cheney 1988). The design was described as follows in an article in the 'Independent Press and Chronicle' on 19 October 1934, soon after the tapestry had been completed: "The work has been carried out in similar technique used in the 17th and 18th century Flemish Tapestries, and though illustrating certain modern buildings, much effort throughout has been made to impart a feeling of antiquity, to be worthy of its position in the historic home of its purchaser, which is shown in the centre, standing near the villages of Lode and Quy. To a certain extent 'artist's license' has been taken regarding the actual position of the surrounding towns and villages, from each of which have been gathered characteristic features – for example, the new University Library of Cambridge, the new Jockey Club rooms at Newmarket and the Village Hall at Lode, the latter having been presented by Lord Fairhaven, and erected as a memorial to his father. [...] Regarding the drawing of the Abbey itself particularly, much assistance to obtain the desired effect, was given by very beautiful aerial photographs, lent by Lord Fairhaven. The wild fowl in the foreground, not only have decorative value in the composition of the picture, but are actually in existence in the grounds of Anglesey Abbey, including the golden pheasant, seen perching on the right of the picture, together with woodcock, wild duck, etc.; all of which are carefully protected, and find sanctuary in this enviable spot." The tapestry generated significant interest when it was completed, and it was also reported and illustrated in 'The Times', 24 October 1934. Clifford Barber, usually credited with the design of the Anglesey Abbey tapestry, enrolled at the Cambridge Tapestry Works as a young man having trained at the Cambridge School of Art. He was the first locally-trained designer to join the workshop's drawing office, which would eventually house up to 40 men (CWN 1988). Barber also designed the Royal Jubilee Tapestry, which was inspired by the Anglesey Abbey tapestry (see below). The Cambridge Tapestry Company began as a cottage industry in Ickleford, Hertforshire, where a Mr and Mrs Witter taught needlework and metalworking to local children. Their business expanded and in 1904 they officially established themselves as Ickleford Industries. Some time between 1908 and 1911 the pair became friends with M. Gonnet, head of the Gobelins tapestry workshop in Paris, and he sent two of his weavers to England to teach the art of tapestry weaving and restoration (http://www.thewittercollection.co.uk/). The growing trade in historic tapestries led to rapid expansion and in 1916 premises were bought at no. 15 Thompson's Lane, and the Cambridge Tapestry Company was officially established. During the 1920s the restoration business boomed, and there were as many as eighty workers, mainly young women, in each of the two Cambridge workrooms. One of the projects undertaken was the restoration of an early sixteenth-century tapestry of the 'Life of the Virgin' that was subsequently bought by William Burrell and is now in the Burrell Collection. The Anglesey Abbey tapestry was the first to be woven at the Cambridge Workshop after a new design. During weaving Queen Mary (then Duchess of York) visited the workshop, and expressed great interest in the work ('The Times', 9 January 1934). This led to the commission, in 1935, of a tapestry of Windsor Castle to commemorate the Silver Jubilee of that year. The Royal Jubilee Tapestry, as it was known, was also designed by Clifford Barber who was advised by Professor A J B Wace, Keeper of Textiles at the Victoria and Albert Museum ('The Times', 27 July 1936; Barber 1936a, Barber 1936b, Barber 1937). During the 1930s the workshop declined due to loss of trade and, especially in the later 1930s, the difficulty in obtaining raw materials. Lord Fairhaven continued to take a keen interest in the company and in 1939 he commissioned a second tapestry, this time a coat of arms based on a seventeenth-century tapestry in his own collection ('The Arms of Lord Fairhaven', no. 516781). The same year the Cambridge Tapestry Company ceased to exist and much of the company's stock was sold to the Royal School of Needlework. Lord Fairhaven and Professor Wace tried to keep the weavers together and re-named the workshop the Tapestry Company under Arthur Baldry as Director (Cheney 1988). A series of letters now held at Anglesey Abbey show that Lord Fairhaven had a controlling interest in the company in its last years, and company accounts were submitted to him from 1940 onwards. Business was officially stopped in 1941 with the exception of jobs already in hand, and in March 1943 the premises at Thompson's Lane were vacated. Although the Company is only known to have made three large-scale tapestries after new designs – the two at Anglesey Abbey and the Royal Jubilee tapestry – a number of pieces of needlework are recorded and many still survive. A double-sided two-leaf screen in the National Trust's collection at Lanhydrock is one of these (no. 883242), its design of a medieval hunt in woodland matching a cartoon now in the possession of descendants of the Witter family (illustrated at http://www.thewittercollection.co.uk). (Helen Wyld, 2012)

Commissioned in 1934 by Huttleston Rogers Broughton, 1st Lord Fairhaven (1896-1966) for Anglesey Abbey; bequeathed by Lord Fairhaven to the National Trust with the house and the rest of the contents.