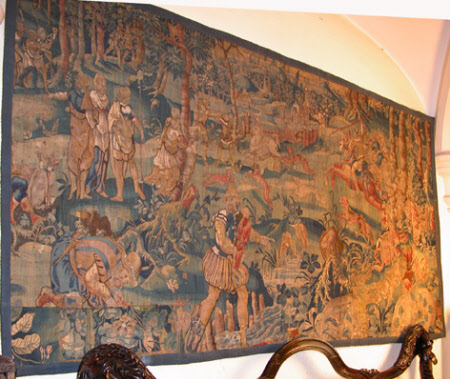 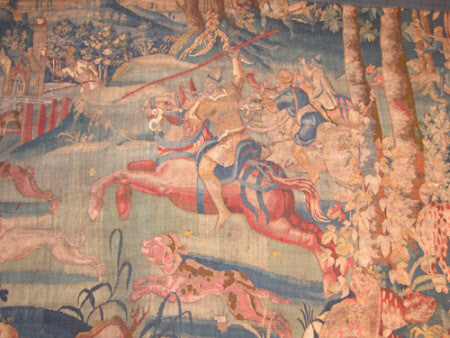 Tapestry, wool and silk, 4½ warps per cm, Hunting Park, Flemish, possibly Audenaarde, c. 1580-1600. A landscape populated by huntsmen and fantastical beasts. In the left foreground a man kneels down, partly cut off by a patch at the bottom of the tapestry, and in the centre a man in a doublet and breeches strides across a stream with a falcon on his arm. Above these figures there are groups of huntsmen and women with hunting horns, hounds and bows and arrows, including two men near the centre of the tapestry aiming an arrow at a unicorn. The unicorn is pursued from the right by a group of men on horseback, the nearest one holding a large spear above his head, and a large red dog. On the right hand side there is a family of leopards with red spots, and at the lower right corner a large horse-like animal whose legs and head are cut off by the bottom of the tapestry. The tapestry has no borders and has clearly been cut from a larger panel. At the bottom left a rectangular section has been sewn in, possible from elsewhere within the same tapestry. A dark blue galloon has been applied around all four sides.

Hunting tapestries with small figures in landscape settings such as this one were produced in large numbers in the Southern Netherlands at the end of the sixteenth century and the beginning of the seventeenth. They sometimes included fantastical beasts, and alongside hunting scenes such as the present one they could include pastoral groups of shepherds and shepherdess or amorous couples. These tapestries are usually referred to as 'hunting parks'. The increasing prevalence of such decorative subjects, as opposed to the developed historical and biblical subjects with large figures that prevailed earlier in the sixteenth century, has been linked to the religious and political strife in the Netherlands and the resulting emigration of many tapestry weavers which severely impacted the tapestry industry. The style of tapestries such as the Anglesey Abbey ‘Hunting Park’, with its broad weave, limited colour palette and above all the small figures, was far cheaper to produce than compositions with large figures, which required more skill and investment (Campbell 2007, pp. 24-26; de Meûter 1999, pp. 122-3). A number of surviving ‘Hunting Park’ tapestries similar to the one at Anglesey Abbey are known to have been made in Oudenaarde, the second largest weaving centre after Brussels in the sixteenth and seventeenth centuries (see for example de Meûter 1999, pp. 140-147). However similar tapestries were also made in Brussels, Antwerp, and other centres. (Helen Wyld, 2011)