The Requests of the People 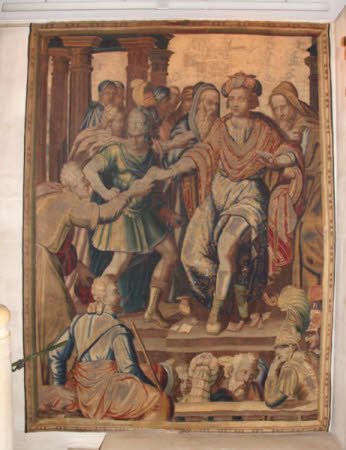 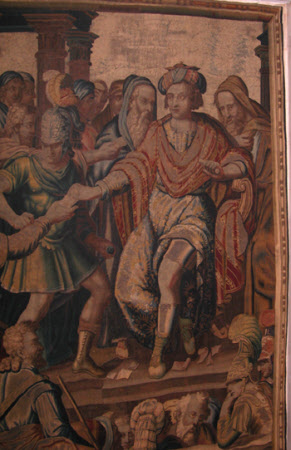 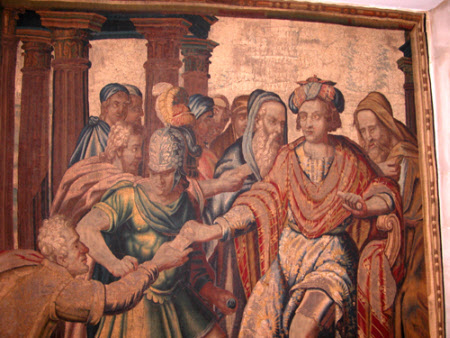 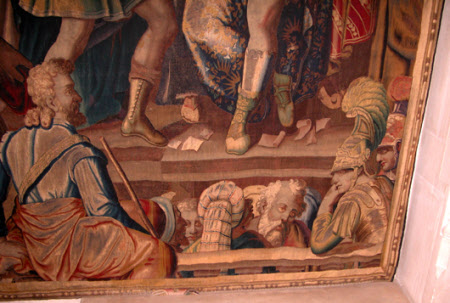 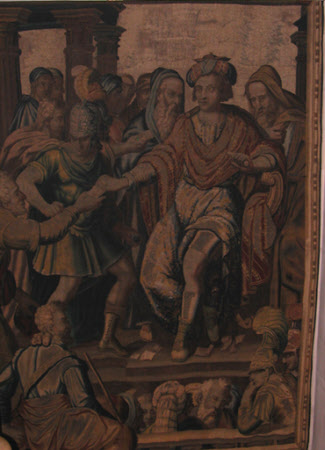 Tapestry, wool, silk and metal thread, 7 warps per cm, The Requests of the People, Faubourg Saint-Marcel Manufactory, Paris, c. 1610-1620. A man wearing a cloth hat and blue and red robes sits on a large chair to the right, reaching out with one hand to receive a small scroll of paper from a man who ascends steps to meet him from the lower left. More scrolls of paper lie on the ground around the seated man's feet. Behind the two figures a soldier stands in front of a crowd of men in togas by a columned structure. At the lower edge of the scene there is a stone ledge with a man seated on it on the left and a soldier leaning on it on the right, and a row of heads visible on the other side of it. The tapestry has a narrow border with a bead-and-reel pattern around all four edges. A blue galloon running outside the side borders has been folded in. At the top and bottom there would have been wide borders, but these have been folded in, as have parts of the main field inside the upper and lower borders.

Made for Charles Emmanuel, Duke of Savoy (1562-1630) and purchased in 1620 or soon after; posthumous inventory of Christine of France (1606-1663); Henry Anthony Van Hievelt, Camilla Lacey sale, 28 November 1922, lot 120; acquired (at this sale or later) by Huttleston Rogers Broughton, 1st Lord Fairhaven (1896-1966) for Anglesey Abbey; bequeathed by Lord Fairhaven to the National Trust with the house and the rest of the contents.