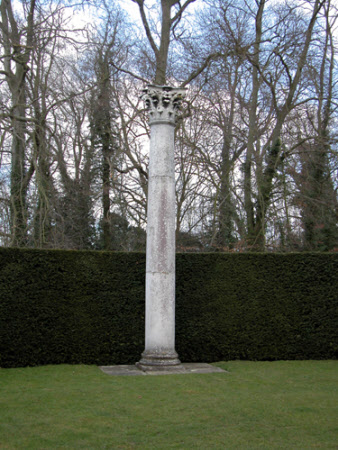 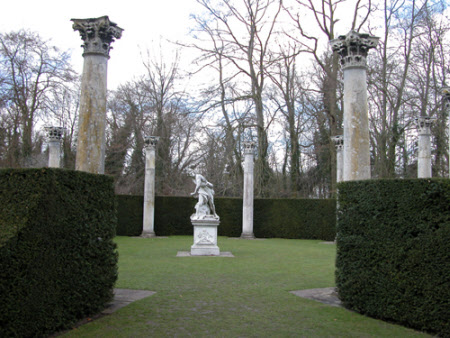 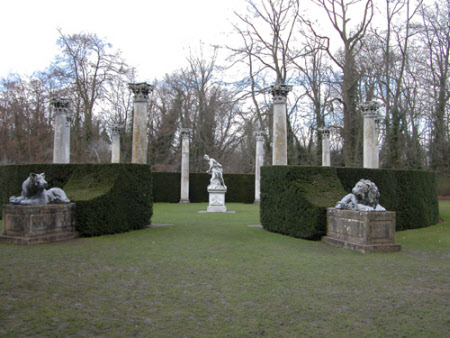 Portland stone, ten Corinthian Columns from Chesterfield House, London, British (English) School, c. 1748-52. A set of ten columns in the Corinthian order, with typically elaborate capitals carved with acanthus and scrolls. Removed from Chesterfield House, the Mayfair mansion of Philip Stanhope, 4th Earl of Chesterfield (1694–1773), built between 1747 and 1752 and demolished in 1937. Mounted on concrete and paving stone bases and installed in a circle on Temple Lawn in 1953; with lead covers on the capitals.

When Chesterfield House was pulled down before the Second World War its fabric, writes Roger White, was 'cannibalised for re-use elsewhere': a caryatid chimneypiece going to the Metropolitan Museum of Art, New York, for example, and a set of ten Corinthian columns to Anglesey Abbey (White 1984, p. 175). These presumably came from the west front colonnade, narrowed in 1870 by Charles Magniac, and depicted in an original watercolour from the Office of Works (now inv. no. 17/3/9, Soane office, Sir John Soane's Museum, London) and later in a photograph published in Country Life (Tipping 1922, p. 235). Chesterfield House was designed by Isaac Ware (1704-66), a protégé of Lord Burlington and architect at the Office of Works who, in 1738, published a definitive translation of Palladio's Quattro Libri illustrated with his own drawings. Ware was devoted to the application of the Palladian style to every part of a building and was scathing about the influence of the French rococo which his Francophile patron, the Earl of Chesterfield, favoured. This disparity of taste, epitomised by Ware in an oft-quoted passage from his 'Complete Body of Architecture', ultimately culminated in Ware's greatest commission, a masterpiece of English Palladianism and Rococo combined (Parker 1963, p. 203). Frustratingly little detail is provided by Ware on the craftsmen employed to furnish Chesterfield House. 'First artists in their several professions' are acknowledged which suggests English origin. Alice Rylance-Watson 2019