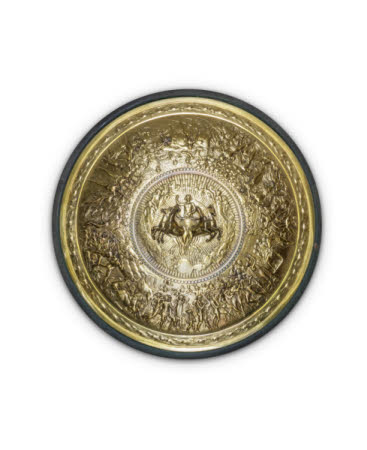 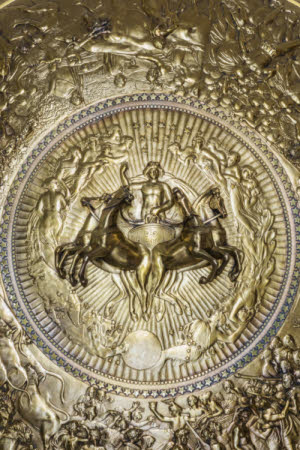 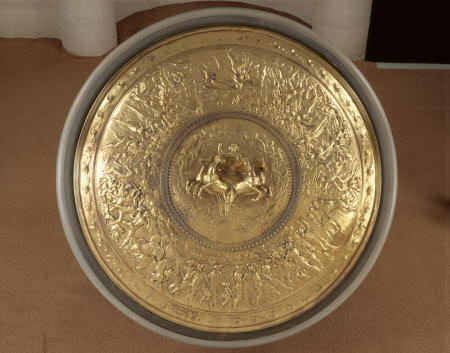 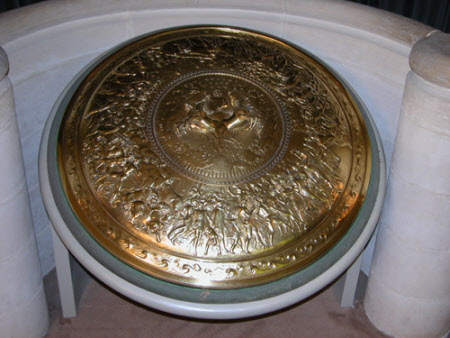 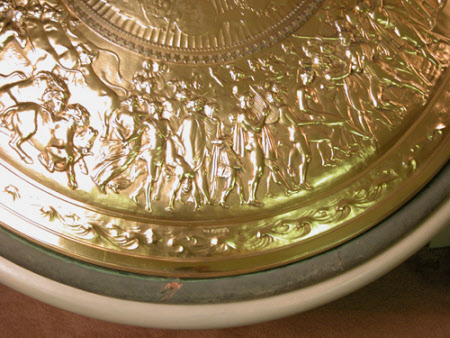 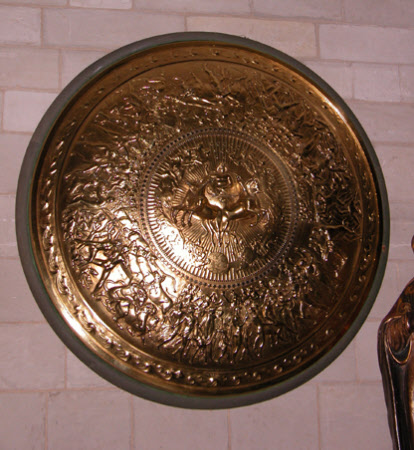 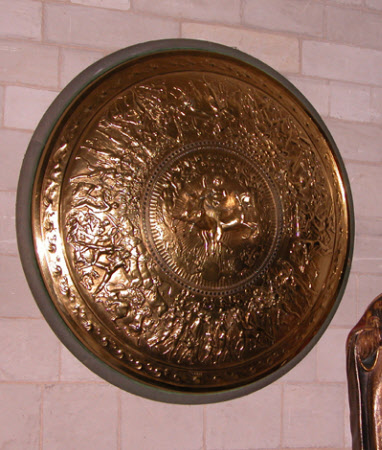 The exploits of the ancient Greeks were a source of fascination and inspiration in the early 19th century. The goldsmith Philip Rundell (1746–1827) commissioned the artist and sculptor John Flaxman (1755–1826) to design the shield of Achilles as described in Homer’s Iliad (9th century BC). In the myth, Hephaestus, the god of metalworking, formed ‘an immense and solid shield’ for Achilles, who was half-man, half-god and instrumental in the victory over the Trojans. Flaxman relied upon Alexander Pope’s translation of The Iliad (1715–20), and at the centre of the shield we see the radiant sun god, Apollo, surrounded by the constellations. Five of these shields were made in silver gilt between 1819 and 1824, all of them considered masterpieces of Regency silver. One was made for King George IV (1762–1830), and this example, made of solid silver and then gilded, was produced in 1822. It was purchased in the mid- 20th century by the collector Huttleston Rogers Broughton, 1st Lord Fairhaven (1896–1966), for his home, Anglesey Abbey in Cambridgeshire.

The Shield of Achilles, sterling silver, gilded, marked by Philip Rundell of Rundell, Bridge and Rundell, London, 1822/3 and designed and modelled by John Flaxman. The convex-shaped shield is cast and chased and has a central scene of Apollo driving the chariot of the sun on a rayed background surrounded by symbolic representations of constellations and enclosed in a border of burnished stars. Surrounding this is a broad frieze with a series of scenes from the Iliad, bordered by a narrow band of waves representing the ocean.

Acquired by William Lowther, 1st Earl of Lonsdale (1757-1844). It passed by descent with Lowther Castle, Westmorland to Lancelot Lowther, 6th Earl of Lonsdale by whom it was sold at Christie’s, London, 20th February 1947, lot 136, for £520 to Urban Huttleston Rogers Broughton, 1st Lord Fairhaven. Bequeathed to the National Trust in 1966 by Huttleston Rogers Broughton, 1st Lord Fairhaven (1896-1966) with the house and the rest of the contents.