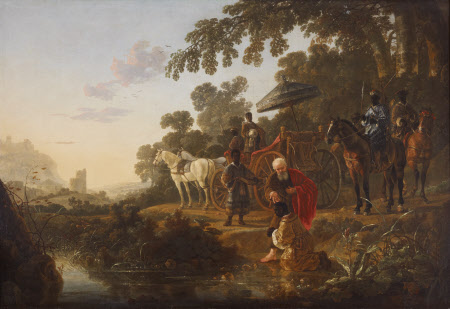 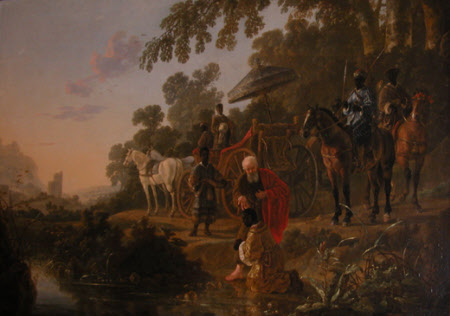 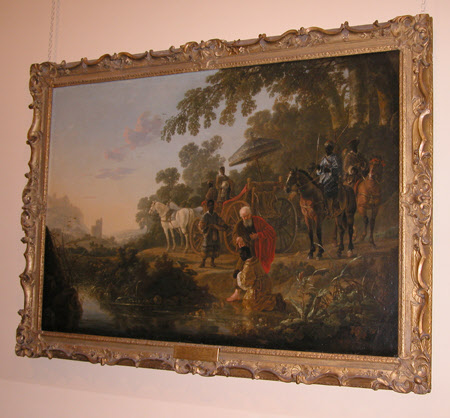 Saint Philip the Evangelist, one of the seven deacons of the church, is mentioned in the biblical Acts of the Apostles but he is distinguished from one of Christ’s twelve apostles. Simon Magus was one of Philip’s converts. He baptised the Ethopian eunuch (Simeon Bachos, a treasury official at the court of Queen Candace), who was returning to his kingdom of Meroe, on the road between Jerusalem and Gaza, signifying the start of the Christianity in Africa. (Acts 8: 25-40). The Dutch artist Aelbert Cuyp, better known for his landscapes bathed in ethereal golden light, in and around his native Dordrecht, did paint some religious scenes. There is another version of this baptism in the Menil Collection, Houston , Texas.

Oil painting on canvas, Saint Philip the Evangelist baptising the Ethiopian Eunuch by Aelbert Cuyp (Dordrecht 1620 – Dordrecht 1691), signed lower right: A cuijp fet, circa 1655. The view exhibits a hilly and highly luxuriant landscape, under the aspect of a bright sunny afternoon. The eunuch is accompanied by several African attendants, one of whom holds the Book of Isaiah, and another holds the removed turban. A carriage, shaded by a canopy or large parasol, drawn by two white horses, hesitates nearby. Two other servants are mounted on chestnut horses at the rear, to the right. The eunuch, in rich oriental costume, kneels by the side of stream in the centre foreground, being baptised by Saint Philip. Ruined buildings and mountains in the distance, on the left.