View of Windsor Castle from the River 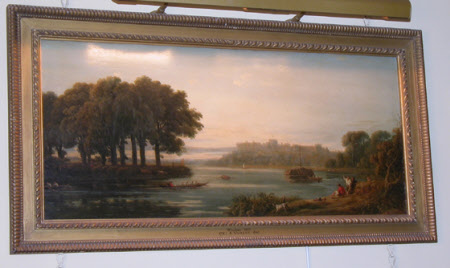 This painting shows the river with the Castle visible in the middle distance. Although Varley had been apprenticed to a silversmith, early on he obtained employment with a portrait painter in Holborn and studied drawing under J. C. Barrow. Watercolour was Varley's favoured medium and he was one of the founders of the Old Watercolour Society as well as a renowned teacher of the medium, numbering among his pupils W. H. Hunt and Turner of Oxford, examples of whose work hang at Anglesey Abbey, as well as the better known David Cox, John Linnell and William Mulready. Varley's early watercolour style was broad and simple, and characterized by the employment of pure, fresh tints.