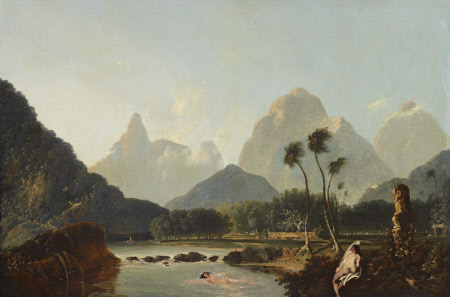 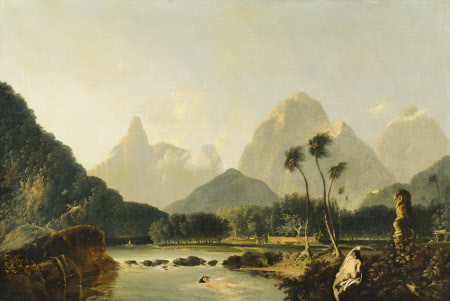 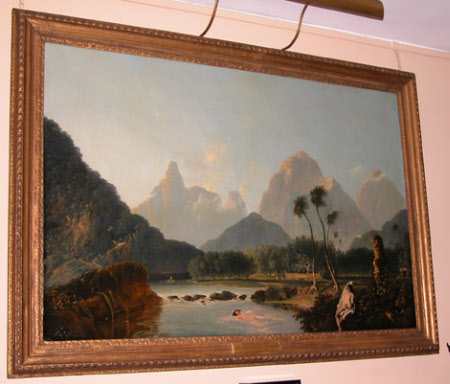 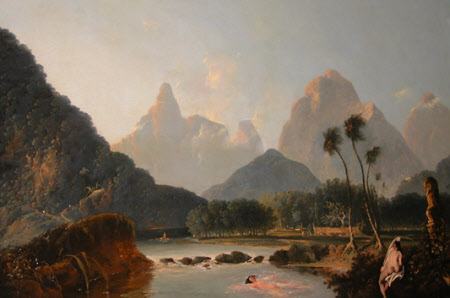 Oil painting on canvas, View of Oaitepeha Bay, Tahiti, by William Hodges RA (London 1744 - Brixham 1797), signed and dated: Hodges 76 [1776]. The background of picture is dominated by towering mountain peaks; river in foreground, broken by a stone causeway, with a naked female bather in the water floating on her back and on the right, another naked female bather, seated with her back to the spectator, drying herself with a large white towel and displaying her tattooed bottom, the river winds through a wooded area of land where there is a native hut, and a carving of a ‘tii’ or ancestral image on the far right foreground which is shown seated in a high-backed chair or throne (this is based on the figures which are found on the prows of certain Tahitian boats); on the bank between the two figures are three tall coconut palms. In the distance on the far right behind the ancestral image is a toupapow; or elevated platform, bearing a shrouded corpse.The bathers are painted as white-skinned to avoid upsetting the sensibilities of the time. Another version is in the Ministry of Defence Art Collection, Whitehall, London and its companion (Tahitian War Galleys in Matavai Bay, Tahiti) is in the Paul Mellon Collection, Yale Center for British Art. Tahiti (Otaheite), 33 miles long, is the largest island of the Iles du Vent of the Society Islands, French Polynesia, in central South Pacific. It has two ancient eroded volcanic cones, connected by the Isthmus of Taravao. Apart from a fertile coastal plain, the terrain is jagged and mountainous, rising to Mount Orohena on Tahiti Nui and to Roniu on Tahiti Ili and is fringed by coral reefs and lagoons. The natural vegetation includes coconut palms, hibiscus and tropical fruit trees. It was visited in 1767 by Captain Samuel Wallis of the British Navy, who named it King George III island. Subsequently it was visited by Louis-Antoine de Bougainville in 1768, who claimed it for the French and by two English navigators, Captain James Cook in 1769 and William Bligh in the HMS Bounty in 1788. William Hodges accompanied Cook on his second voyage around the world as his official artist, on the HMS Resolution. On August 16, 1773 Cook sailed into Vaitepiha (Oaitipeha) Bay in order to obtain much-needed provisions for his crew, but after a week of trading with the natives produced only three hogs and a small quantity of fruit, Cook weighed anchor and proceeded to Matavai Bay on the northern side of the island. King Tu (Otoo or Otou) received Cook and his party more hospitably, and although hogs were scarce even in Matavai Bay, Cook was able to replenish the ships' stores and set sail for Huahine on September 1. Returning to Matavai Bay on April 22, 1774, Cook received a warm welcome from King Tu, and several other chiefs along with a gift of ten hogs. Red feathers acquired in Tongatapu were highly valued in Tahiti so that provisions were quickly secured. Cook remarked on the prosperity that had come to Matavai Bay since his visit nine months earlier. Many houses had been built and a war fleet of 160 large double canoes and as many smaller vessels was assembled at Pare. Cook and the gentlemen, including Hodges, paid several visits to Pare to see the fleet, and on May 13 they saw forty of the war canoes under sail. On the following day Cook set sail for Raiatea

H. T de Vere Clifton (?); sale, Christie's, November 19, 1948 (162), one of a pair (the other: Tahitian War Galleys in Matavai Bay, Tahiti is now in the Paul Mellon Collection, Yale Center for British Art) of pictures to Spink for £ 23; bequeathed to the National Trust by Huttleston Rogers Broughton, 1st Lord Fairhaven (1896-1966) with the house and the rest of the contents.