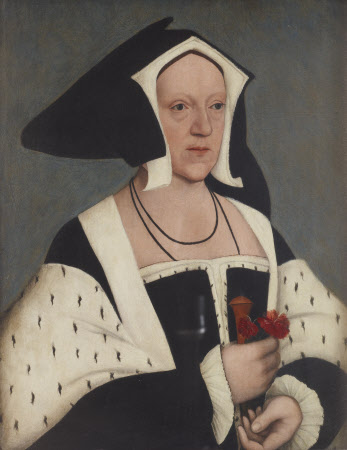 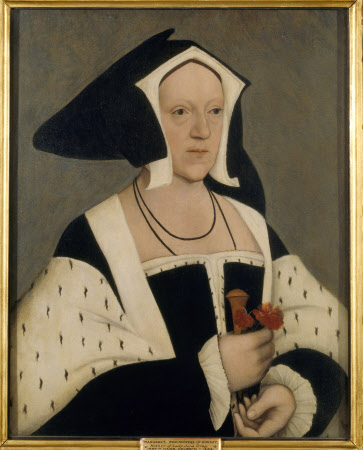 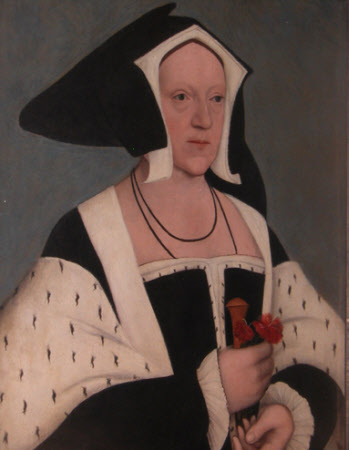 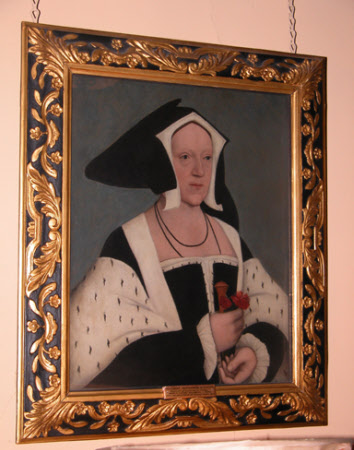 Oil painting on panel, Margaret Wotton, Marchioness of Dorset (d. 1535) after Hans Holbein the younger (Augsburg 1497/8 - London 1543). A half-length portrait, turned three-quarters to right, wearing a black diamond-shaped hood lined with a black veil falling at the back; black square-cut, ermine lined dress, deep ermine cuffs at elbows; white scarf over shoulders; double string of small black beads round neck; both hands held in front, in her right hand two pinks and a cane. Dark monochrome background. She was the daughter of Sir Robert Wotton (1455-1519) of Boughton Malkerte, Kent and Anne Belknap (b.1460); married first William Medley, and second in 1509, Thomas Grey, 2nd Marquess of Dorset (1477-1530).Their children were: Catherine Grey (d.1542), Elizabeth Grey, Sir Henry Grey, 1st Duke of Suffolk (1517-1554), the father of Lady Jane Grey (1537-1554). The artist at Henry VIII’s court with the greatest ability to capture a truthful likeness and show something of the sitter’s personality was Hans Holbein, who entered Henry VIII’s service in 1536. Unfortunately the king exploited Holbein’s powers to little purpose. Indeed Holbein had so little support for his pioneering ideas, derived from Renaissance Humanism, that on his second visit to London he was forced to conform with the native style of painting in the Gothic tradition. Rather than making his figures appear in receding space, he gave them inscrutable features, elaborate costumes and set them against flat backgrounds. These characteristics became exaggerated with Holbein’s imitators; we can see this in the painting of the Marchioness of Dorset, the mother of Henry Grey and grandmother of Lady Jane Grey. Although all the details are depicted with great care, there is a characteristic incongruity between the solidity of the figure and the dark monochrome flat background

Sir Randolf Baker sale, Christie’s, 31 January, 1947, lot 26. Date of acquisition by Lord Fairhaven is unknown. Bequeathed to the National Trust by Huttleston Rogers Broughton, 1st Lord Fairhaven (1896-1966) with the house and the rest of the contents.