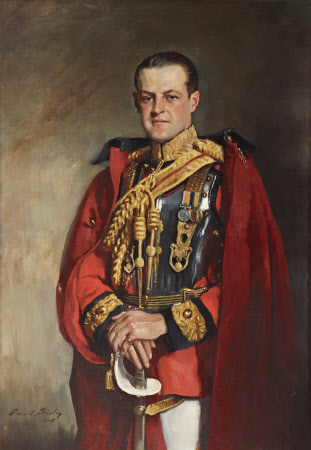 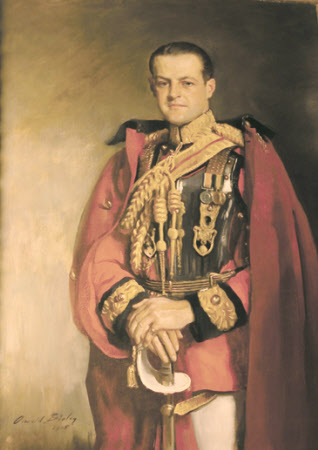 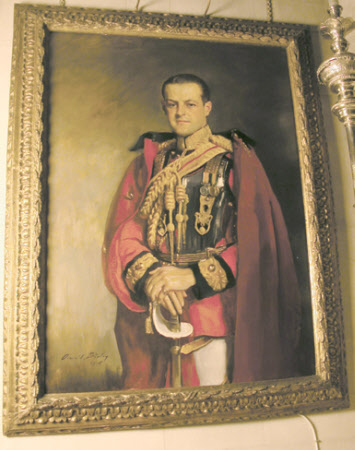 Oil painting on canvas, Huttleston Rogers Broughton, 1st Lord Fairhaven (1896-1966) in the Ceremonial Uniform of the 1st Life Guards by Sir Oswald Hornby Joseph Birley, RA (Auckland 1880 – 1952), signed and dated, lower left: O. Birley 1925. A three-quarter-length portrait, standing turned slightly to the left, gazing at spectator, wearing the ceremonial uniform of the 1st Life Guards, with a metal breastplate, white breeches and a red cloak with a black collar, resting on his shoulders; his hands in front, resting on his sword. Lord Fairhaven, who remained a bachelor all his life, and his mother were deeply attached, and until her death in 1939, distant cruises on her sumptuous yacht Sapphire which carried a crew of sixty were an almost annual event. Lord Fairhaven and his brother had originally bought Anglesey because it lay conveniently near Newmarket and Bury St Edmunds where they owned the Barton Stud. In the twenties it was also situated in outstandingly good partridge country. The brothers agreed that whoever married first should sell his share in the estate to the other, so that when Henry wed in 1932, Lord Fairhaven became the sole owner of Anglesey. Though Lord Fairhaven maintained his sporting interests throughout his life, Anglesey soon became the focus for activities of a different sort as the new owner was a dedicated and immensely wealthy patron of the arts. Methodically he set about the collection of the topographical paintings, the illustrated books, the eighteenth-century snuff boxes, the Italian mosaics the bronzes, the statuary, the tapestries, and the furniture which make Anglesey so fascinating and so unusual a house. But undoubtedly his most remarkable achievement was the creation, in the unpromising fen landscape, of a garden to which the adjective ‘great’ can properly be applied. As Sir Arthur Bryant wrote in 1964: “Our age is not without rich men, yet …. Huttleston Fairhaven must be almost unique in having created in the middle of the twentieth century a garden which can compare with the great masterpieces of the Georgian era. With patience, single-minded devotion and flawless taste, in an age of war and devotion he has endowed the England of tomorrow with a landscape garden worthy of her past.” (National Trust, Anglesey Abbey, 1992)

Lees-Milne 1975 James Lees-Milne, Ancestral Voices, 1975, pp.238-239: “10 September 1943 We returned to Anglesey…I ravenous… Even so I did not eat as much as my host, who at forty-seven has a large paunch, a heavy jowl, pugnacious chin and a mottled complexion. He lives too well and smokes endless cigars. The nice agent, a gentleman from these parts (Lord Fairhaven is not from these parts) only spoke when spoken to. Relations between the two very much those of gracious employer and subservient employee. … The interior [of Anglesey Abbey] is entirely his, opulent and pile-carpeted. But his new library with high coved ceiling, lined with books (first editions and un-cut) is fine. He has a desultory collection of good things that do not amount to a great collection. There is a corridor of Etty nudes in his private bedroom wing. Exhausted, I had a bath and changed into a dark suit. Lord Fairhaven wore a dinner jacket. We had a four-course dinner of soup, lobster, chicken and savoury, and were waited upon by the butler. Lord Fairhaven is served first, before his guests, in the feudal manner which only the son of a magnate would adopt. Presumably the idea is that in the event of the food being poisoned the host will gallantly succumb, and his instant death will be a warning to the rest of the table to abstain. Port and brandy followed.” Lees-Milne 1983: James Lees-Milne, Caves of Ice, Chatto and Windus, 1983, p.12: “ 25 January, 1946. …got to Anglesey Abbey for tea. Wonderfully appointed house, soft-treading carpets; full of semi-works of art, over-heated, over-flowered, and I do not covet it or anything in it. We had a frugal tea but sumptuous dinner prefaced by whisky and epilogued by port. Lord F is precise, complacent and dogmatic. But hospitable and kind, although aloof and pleased with his noble position. Who is he anyway? The son of an American oil magnate. We talked till midnight and groaned delightedly over the way the nation is going to the dogs.” Lees-Milne 1992 James Lees-Milne, People and Places. Country House Donors and the National Trust, London 1992, pp.218-219: “A very different establishment was kept at Anglesey Abbey, by Huttleston, 1st Lord Fairhaven who insisted on being served at meals before his guests, according to medieval precedence, in a vaulted crypt. Everything – food, drink comfort, service and even the temperature – was precisely regulated. No owner can have surveyed his good fortune more complacently than Huttleston as he lounged in a deep armchair, cigar in mouth, port glass in hand, while gently flicking invisible specs of dust off his immaculate trousers. Not that there was no justifiable cause for satisfaction with the house which he had filled with much high-class furniture from London’s top dealers as well as some very considerable works of art; and also the grounds laid out á la Versailles, to his own design and peopled with statuary.” National Trust (Great Britain), Anglesey Abbey., 2006 RpC, Lord Fairhaven, remembered by Simon Houfe: “Tall, commanding and well built with a rather florid complexion and a very square chin. His great fortune, coupled with inherent shyness made him seem stiff and unapproachable at times….Life at Anglesey….ran like clockwork and nobody was ever late for anything…Menservants moved noiselessly about, gardeners continually changed blooms from the hot-houses and it was reputed that guests had their shoe-laces ironed before breakfast.” National Trust, Anglesey Abbey, 2006, p.2