A pair of sphinxes 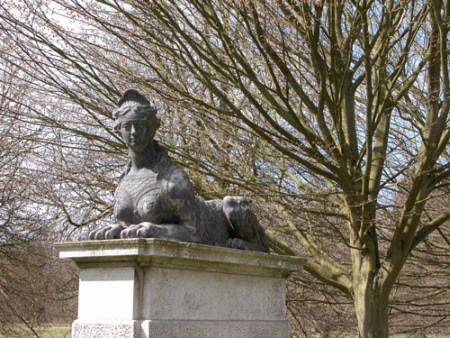 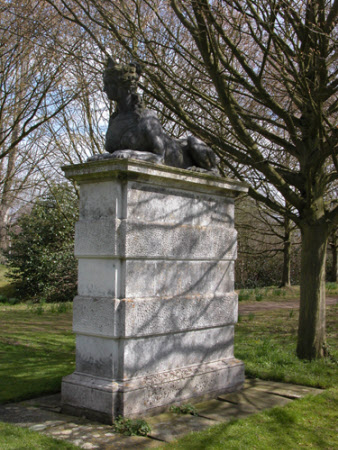 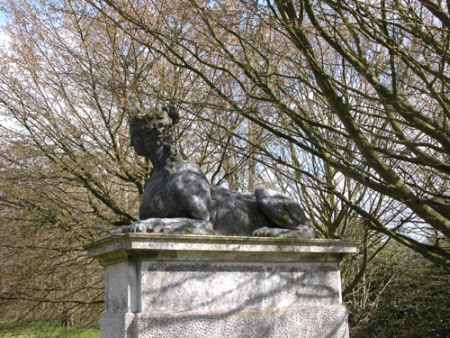 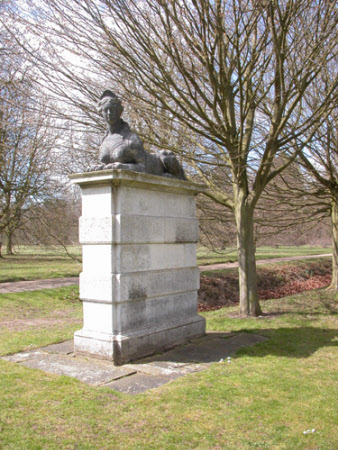 Lead, a pair of sphinxes, John Cheere (London 1709 – London 1787), c. 1760-80. A pair of sphinxes modelled and cast in lead by John Cheere, mounted on stone piers. The sphinxes recumbent, with the bodies of a lioness and the head, neck and chest of a woman. The heads raised and turned to proper right, the hair in loose flowing waves tied in a chignon at the back and styled with a band across the forehead and a sea-shell shaped tiara in the rocaille style. The sphinxes wear scaled breastplates with scrolling acanthus and saddles, embroidered with guilloche and scrolling acanthus, draped over the back and sides.

Casts of a popular model of saddled sphinx by John Cheere, adapted and reproduced in various media from the mid-18th century. The model is based on Egyptian-style stone sphinxes carved by Giovanni Battista Guelphi (1690/1-1736) for Lord Burlington (1694-1753) and William Kent’s (c. 1685-1748) iconic garden at Chiswick (Davis 1991, p. 95). Guelphi partly based his design on an antique sphinx known through the sculptor’s association with Burlington and another English nobleman, Thomas Fermor, 1st Earl of Pomfret (1698–8 July 1753), when all three were in Rome in 1718. Under the latter’s patronage Guelphi moved to England two years later, tasked with the restoration of a collection of antique marbles Thomas’s father, Baron Leominster, had purchased from the Earl of Arundel. It was during this time that he undertook the repair of a late Roman sphinx, and the carving of a modern pendant, which were later bequeathed to the Ashmolean Museum, Oxford, by the Countess Dowager Pomfret in 1755 (Penny 1992, III, 97). By the mid-1720s Guelphi was in the employ of Burlington and Kent, carving statues for the gardens of Burlington’s Palladian villa, Chiswick House. One of the first and most celebrated English landscape gardens, Chiswick was filled with sculptures symbolically evoking the atmosphere and appearance of an ancient Roman garden. Although sphinx ornament had little precedent in Britain, Burlington was a powerful arbiter of taste, and thus a pair of sphinxes, with headdresses modelled on the Pomfret marble and bodies on saddled sphinxes at Marly and Versailles (see Château de Versailles, inv.nos. INV.GRAV 384-5 and the marble pair by Houzeau and Lerambert of 1668, inv.nos. MR 3302-3), was produced for Chiswick. These were installed by 1728, appearing in Pieter Rysbrack’s view of the front of Chiswick House painted that year. In 1749, two decades later, a lead sphinx cast after Guelphi’s model was produced by John Cheere (1709-87), England’s leading manufacturer of sculpture in lead (Davis 1991, pp. 95-101; Barnard and Clark 1995, p. 110). The Burlington accounts record a payment to Cheere in February 1749 for ‘a sphynx in Lead’, the cast installed in the gardens of Chiswick House with its stone counterparts by 1753 (they appear in ‘A View of the Back Front of the House and part of the Garden of the Earl of Burlington at Chiswick’ after John Donowell, etching, first issued 1753, re-issued 1760-66, RCIN 701784.g, Royal Collection Trust). All three remain at Chiswick to this day. It is presumably from the moulds Cheere took in 1749 that subsequent lead copies of Guelphi’s sphinx – and Cheere’s variant models of it – were made. As casts were piece-moulded, variations in design could be achieved by altering parts of a mould in line with stylistic trends and a patron’s demands. Cheere supplied casts of the Chiswick Egyptian-style sphinx and at least two other types in a Grecian style. Copies of the former type were produced for Castle Hill, a Palladian estate designed under the guidance of Lord Burlington (Fulton 2003, p. 29), and for Temple Newsam, Hopetoun House and Saltram (NT 872412), the last two of these houses remodelled in the 1760s by Robert Adam (1728-92), a neoclassical architect with whom Cheere regularly collaborated. Cheere had supplied Adam with decorative statuary at Kedleston, and appears also to have done so at Syon, Osterley and Compton Verney. Copies of the Grecian-type sphinx are found at the last three of these houses, each remodelled by Adam in the 1760s (see Adam’s ink and wash design for the portico at Osterley, NT 771548, which incorporates Cheere’s saddled sphinxes as finial ornament). Whilst archival evidence cannot firmly connect Cheere to these casts, he is the documented supplier of similar sphinxes at Stourhead (1747), Blenheim Palace (1773), and Somerset House (1778). Un-itemised payments to the sculptor are recorded in the Duke of Northumberland’s account books in 1767 and 1769, when Adam was working on Syon, and also in Sir Francis Dashwood’s accounts, where a further pair of saddled Grecian sphinxes in lead, identical to those at Anglesey Abbey (NT 515156) and Compton Verney, are mounted in the gardens of West Wycombe Park (NT 807673). Sphinxes were not the only sculptures to have been cast by Cheere from originals at Chiswick; he supplied lead copies of a stone lion and lioness to West Wycombe Park (NT 807675) and to other houses, a pair with an unknown provenance having been bought by Lord Fairhaven for Anglesey in 1950 (NT 515157-8). The model continued to be reproduced and adapted throughout the 18th century, with variations in headdress, harness and saddle to cater to changing tastes. In ceramic media, sphinxes were reproduced in artificial stone (see the Coade pair at Croome Court, NT 105011, and the 19th century pair by Austin & Seeley at Blickling Hall, NT 355656) and in small-scale decorative pottery to dress mantelpieces and tables and pediments, such as those at Kedleston (NT 109024). Alice Rylance-Watson January 2020

Purchased by Huttleston Rogers Broughton, 1st Lord Fairhaven (1896-1966) from Bert Crowther, Syon Lodge, on 5 September 1950, £600; bequeathed to the National Trust by Lord Fairhaven in 1966 with the house and the rest of the contents.